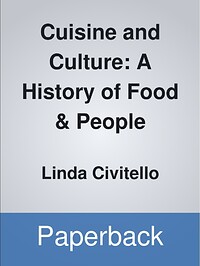 Cuisine and Culture: A History of Food & People

An illuminating account of how history shapes our diets-now revised and updated Why did the ancient Romans believe cinnamon grew in swamps guarded by giant killer bats? How did the African cultures imported by slavery influence cooking in the American South? What does the 700-seat McDonald's in Beijing serve in the age of globalization? With the answers to these and many more such questions, Cuisine and Culture, Second Edition presents an engaging, informative, and witty narrative of the interactions among history, culture, and food. From prehistory and the earliest societies around the Tigris and Euphrates Rivers to today's celebrity chefs, Cuisine and Culture, Second Edition presents a multicultural and multiethnic approach that draws connections between major historical events and how and why these events affected and defined the culinary traditions of different societies. Fully revised and updated, this Second Edition offers new and expanded features and coverage, including: New Crossing Cultures sections providing brief sketches of foods and food customs moving between cultures More holiday histories, food fables, and food chronologies Discussions of food in the Byzantine, Portuguese, Turkish/Ottoman, and Austro-Hungarian empires Greater coverage of the scientific genetic modification of food, from Mendel in the 19th century to the contemporary GM vs. organic food debate Speculation on the future of food And much more! Complete with sample recipes and menus, as well as revealing photographs and illustrations, Cuisine and Culture, Second Edition is the essential survey history for students of food history.… (more)

Food: A Culinary History (European Perspectives) by Jean-Louis Flandrin
We Are What We Eat: Ethnic Food and the Making of Americans by Donna R. Gabaccia
A Thousand Years Over a Hot Stove: A History of American Women Told through Food, Recipes, and Remembrances by Laura Schenone
Of Sugar and Snow: A History of Ice Cream Making (California Studies in Food and Culture) by Jeri Quinzio
The Cookbook Library: Four Centuries of the Cooks, Writers, and Recipes That Made the Modern Cookbook (California Studies in Food and Culture) by Anne Willan
11 more
Hog and Hominy: Soul Food from Africa to America (Arts and Traditions of the Table: Perspectives on Culinary History) by Frederick Douglass Opie
The Edible South: The Power of Food and the Making of an American Region by Marcie Cohen Ferris
Chocolate: History, Culture, and Heritage by Louis E. Grivetti
Consider the Fork: A History of How We Cook and Eat by Bee Wilson
The Taste of American Place: A Reader on Regional and Ethnic Foods by James R. Shortridge
Taco USA: How Mexican Food Conquered America by Gustavo Arellano
In the Hands of a Chef: The Professional Chef's Guide to Essential Kitchen Tools (Culinary Institute of America) by The Culinary Institute of America
FoodFest 365!: The Officially Fun Food Holiday Cookbook by Yvan Lemoine
Food: The History of Taste (California Studies in Food and Culture) by Paul Freedman
The Oxford Companion to American Food and Drink (Oxford Companions) by Andrew F. Smith
Milk : the surprising story of milk through the ages : with 120 adventurous recipes that explore the riches of our first food by Anne Mendelson
Fewer