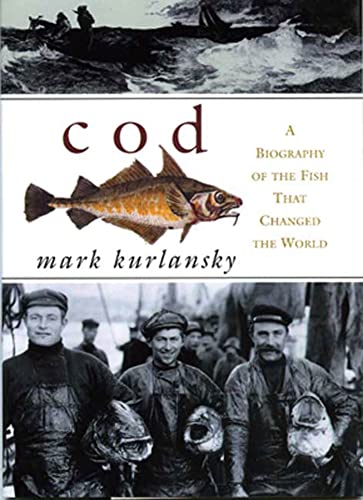 Cod: A Biography of the Fish That Changed the World

Cod spans a thousand years and four continents. From the Vikings, who pursued the codfish across the Atlantic, and the enigmatic Basques, who first commercialized it in medieval times, to Bartholomew Gosnold, who named Cape Cod in 1602, and Clarence Birdseye, who founded an industry on frozen cod in the 1930s, Mark Kurlansky introduces the explorers, merchants, writers, chefs, and of course the fishermen, whose lives have interwoven with this prolific fish. He chronicles the fifteenth-century politics of the Hanseatic League and the cod wars of the sixteenth and twentieth centuries. He embellishes his story with gastronomic detail, blending in recipes and lore from the Middle Ages to the present. And he brings to life the cod itself: its personality, habits, extended family, and ultimately the tragedy of how the most profitable fish in history is today faced with extinction. From fishing ports in New England and Newfoundland to coastal skiffs, schooners, and factory ships across the Atlantic; from Iceland and Scandinavia to the coasts of England, Brazil, and West Africa, Mark Kurlansky tells a story that brings world history and human passions into captivating focus. The codfish. Wars have been fought over it, revolutions have been spurred by it, national diets have been based on it, economies and livelihoods have depended on it, and the settlement of North America was driven by it. To the millions it has sustained, it has been a treasure more precious than gold. Indeed, the codfish has played a fascinating and crucial role in world history.… (more)

The Basque History of the World by Mark Kurlansky
Four Fish: The Future of the Last Wild Food by Paul Greenberg
The Potato: How the Humble Spud Rescued the Western World by Larry Zuckerman
The True History of Chocolate (Second Edition) by Sophie D. Coe
Vanilla: The Cultural History of the World's Favorite Flavor and Fragrance by Patricia Rain
2 more
The Food of a Younger Land: A portrait of American food- before the national highway system, before chainrestaurants, and before frozen food, when the nation's food was seasonal, by Mark Kurlansky
Consider the Fork: A History of How We Cook and Eat by Bee Wilson
Fewer