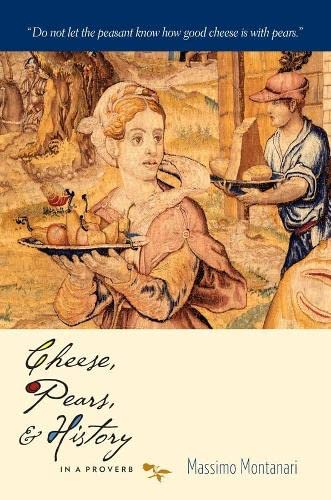 Cheese, Pears, and History in a Proverb (Arts and Traditions of the Table: Perspectives on Culinary History)

"Do not let the peasant know how good cheese is with pears" goes the old saying. Intrigued by these words and their portent, Massimo Montanari unravels their origin and utility. Perusing archival cookbooks, agricultural and dietary treatises, literary works, and anthologies of beloved sayings, he finds in the nobility's demanding palates and delicate stomachs a compelling recipe for social conduct. At first, cheese and its visceral, earthy pleasures were treated as the food of Polyphemus, the uncivilized man-beast. The pear, on the other hand, became the symbol of ephemeral, luxuriant pleasure-an indulgence of the social elite. Joined together, cheese and pears adopted an exclusive savoir faire, especially as the "natural phenomenon" of taste evolved into a cultural attitude. Montanari's delectable history straddles written and oral traditions, economic and social relations, and thrills in the power of mental representation. His ultimate discovery shows that the enduring proverb, so wrapped up in history, operates not only as a repository of shared wisdom but also as a rich locus of social conflict.… (more)

The Oxford Companion to Italian Food by Gillian Riley
The Art of Eating Well: An Italian Cookbook by Pellegrino Artusi
The Art of Cooking: The First Modern Cookery Book (California Studies in Food and Culture) by Maestro Martino of Como
Eating Up Italy: Voyages on a Vespa by Matthew Fort
Of Sugar and Snow: A History of Ice Cream Making (California Studies in Food and Culture) by Jeri Quinzio
11 more
Bread and Oil: Majorcan Culture's Last Stand by Tomas Graves
We Are What We Eat: Ethnic Food and the Making of Americans by Donna R. Gabaccia
Encyclopedia of Pasta (California Studies in Food and Culture) by Oretta Zanini De Vita
America's Founding Food: The Story of New England Cooking by Keith Stavely
Salt by Pierre Laszlo
A Ligurian Kitchen: Recipes And Tales from the Italian Riviera by Laura Giannatempo
Made in Italy: Food and Stories by Giorgio Locatelli
A Mediterranean Feast: The Story of the Birth of the Celebrated Cuisines of the Mediterranean from the Merchants of Venice to the Barbary Corsairs, with More than 500 Recipes by Clifford A. Wright
The Gastronomy Of Italy by Anna Del Conte
Good Things to Eat, As Suggested by Rufus: A Collection of Practical Recipes for Preparing Meats, Game, Fowl, Fish, Puddings, Pastries, Etc. by Rufus Estes
The Entrees: Remembered Favorites from the Past: Recipes from Legendary Chefs and Restaurants by Gail Monaghan
Fewer