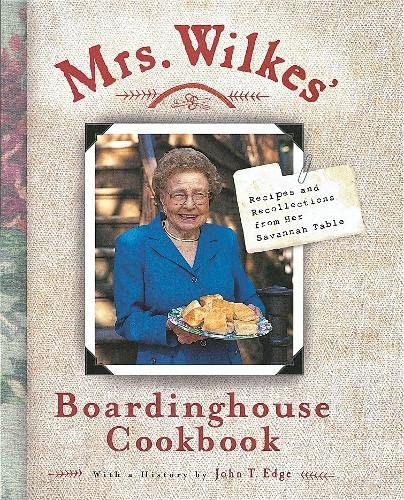 A historical cookbook with more than 300 recipes from a pioneer of Southern cuisine.  In 1943, a young and determined Sema Wilkes took over a nondescript turn-of-the-century boardinghouse on a sun-dappled brick street in historic downtown Savannah. Her goal was modest: to make a living by offering comfortable lodging and Southern home cooking served family style in the downstairs dining room. Mrs. Wilkes' reputation was strong and business was brisk from the beginning, but it was the coverage in Esquire and the New York Times, and even a profile on David Brinkley's evening news that brought Southern-food lovers from all over the world to her doorstep. With over 300 recipes, photos from the boardinghouse, and culinary historian John T. Edge's colorful telling of Mrs. Wilkes' contribution to Savannah and Southern cuisine, this rich volume is a tribute to a way of cooking--and eating--that must not be forgotten. Recipient of Southern Living's Reader's Choice Award 2000 Winner of the 1999 James Beard "America's Regional Classics" Award            … (more)