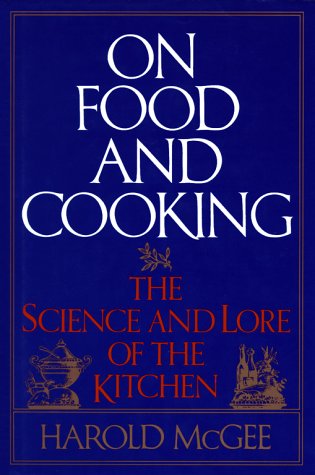 On Food and Cooking: The Science and Lore of the Kitchen

Harold McGee's On Food and Cooking is a kitchen classic. Hailed by Time magazine as "a minor masterpiece" when it first appeared in 1984, On Food and Cooking is the bible to which food lovers and professional chefs worldwide turn for an understanding of where our foods come from, what exactly they're made of, and how cooking transforms them into something new and delicious. Now, for its twentieth anniversary, Harold McGee has prepared a new, fully revised and updated edition of On Food and Cooking. He has rewritten the text almost completely, expanded it by two-thirds, and commissioned more than 100 new illustrations. As compulsively readable and engaging as ever, the new On Food and Cooking provides countless eye-opening insights into food, its preparation, and its enjoyment. On Food and Cooking pioneered the translation of technical food science into cook-friendly kitchen science and helped give birth to the inventive culinary movement known as "molecular gastronomy." Though other books have now been written about kitchen science, On Food and Cooking remains unmatched in the accuracy, clarity, and thoroughness of its explanations, and the intriguing way in which it blends science with the historical evolution of foods and cooking techniques. Among the major themes addressed throughout this new edition are: Traditional and modern methods of food production and their influences on food quality, the great diversity of methods by which people in different places and times have prepared the same ingredients, tips for selecting the best ingredients and preparing them successfully, the particular substances that give foods their flavors and that give us pleasure, and our evolving knowledge of the health benefits and risks of foods. On Food and Cooking is an invaluable and monumental compendium of basic information about ingredients, cooking methods, and the pleasures of eating. It will delight and fascinate anyone who has ever cooked, savored, or wondered about food.… (more)

On Food and Cooking: The Science and Lore of the Kitchen by Harold McGee (Hardcover)

The Curious Cook: More Kitchen Science and Lore by Harold McGee
CookWise: The Hows & Whys of Successful Cooking, The Secrets of Cooking Revealed by Shirley O. Corriher
Larousse Gastronomique by Larousse Gastronomique
The Oxford Companion to Food 2nd Ed by Alan Davidson
Keys to Good Cooking: A Guide to Making the Best of Foods and Recipes by Harold McGee
32 more
The Flavor Bible: The Essential Guide to Culinary Creativity, Based on the Wisdom of America's Most Imaginative Chefs by Karen Page
What Einstein Told His Cook: Kitchen Science Explained by Robert L. Wolke
What Einstein Told His Cook 2: The Sequel: Further Adventures in Kitchen Science by Marlene Parrish
Ratio: The Simple Codes Behind the Craft of Everyday Cooking by Michael Ruhlman
The New Making of a Cook: The Art, Techniques, And Science Of Good Cooking by Madeleine Kamman
The Professional Chef by The Culinary Institute of America
Culinary Artistry by Andrew Dornenburg
Modernist Cuisine: The Art and Science of Cooking by Nathan Myhrvold
I'm Just Here for More Food: Food x Mixing Heat = Baking by Alton Brown
How to Read a French Fry: and Other Stories of Intriguing Kitchen Science by Russ Parsons
The French Laundry Cookbook by Thomas Keller
The Food Lab: Better Home Cooking Through Science by J. Kenji Lopez-alt
I'm Just Here for the Food: Version 2.0 by Alton Brown
Arabesque: A Taste of Morocco, Turkey, and Lebanon by Claudia Roden
Charcuterie: The Craft of Salting, Smoking, and Curing (Revised and Updated) by Michael Ruhlman
The bread baker's apprentice : mastering the art of extraordinary bread by Peter Reinhart
The art of eating by M. F. K. Fisher
The Science of Cooking by Peter Barham
Sauces: Classical and Contemporary Sauce Making by James Peterson
How To Cook Everything: Simple Recipes for Great Food by Mark Bittman
Mastering the Art of French Cooking, Vol. 1 by Julia Child
The River Cottage Meat Book by Hugh Fearnley-Whittingstall
Modernist Cuisine at Home by Nathan Myhrvold
The Zuni Cafe Cookbook: A Compendium of Recipes and Cooking Lessons from San Francisco's Beloved Restaurant by Judy Rodgers
The Science of Good Cooking by The Editors of America's Test Kitchen and Guy Crosby
Bouchon by Thomas Keller
Essentials of Classic Italian Cooking by Marcella Hazan
What Einstein Kept Under His Hat: Secrets of Science in the Kitchen by Robert L. Wolke
The Man Who Ate Everything by Jeffrey Steingarten
Alton Brown's Gear for Your Kitchen by Alton Brown
In Search of Perfection by Heston Blumenthal
Food Lover's Companion, The (Barron's Cooking Guide) 3rd Edition by Sharon Tyler Herbst
Fewer