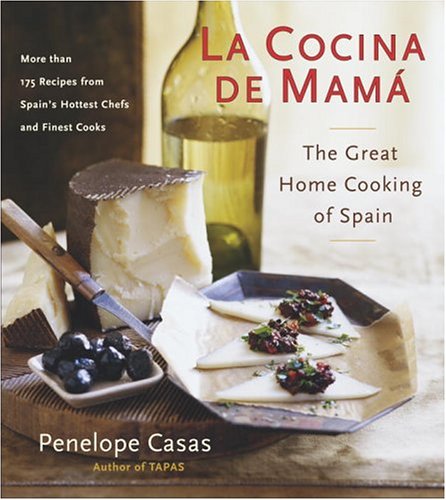 Penelope Casas, the foremost American authority on Spanish food and the author of the bestselling Tapas, presents more than 175 robustly flavored yet amazingly simple recipes representing the best of Spanish home cooking—the cooking handed down through generations of Spanish “mamás.” Long overshadowed by France and Italy, Spain has finally taken its rightful place as one of Europe’s great culinary meccas. Consider the reborn cities of Madrid, Barcelona, and Bilbao; the new respect afforded Spanish wines; the popularity of tapas bars in the U.S.; and Spain’s widely influential Michelin three-star chefs, Ferran Adrià and Juan Mari Arzak. Despite the world-wide acclaim for these chefs, arguably the greatest Spanish food is found not in the nation’s restaurants, but in private homes off-limits to tourists, where women still cook the recipes their mothers and grandmothers cooked before them. Now, Penelope Casas takes us into those homes to uncover the secrets of this simple, easily reproduced, and altogether marvelous cuisine. For La Cocina de Mamá, Penelope Casas has collected recipes from great chefs and traditional home cooks in every region of Spain, all of whom have shared with her the dishes they grew up loving and still cook for themselves today. There are recipes for tapas, like Clams in Garlic Sauce; elegant soups and hearty one-pot meals like Stewed Potatoes with Pork Ribs; many wonderful seafood dishes like Fish Steaks with Peas in Saffron Sauce; meat and poultry dishes, such as Pork Tenderloin in Orange Sauce, Rack of Lamb Stuffed with Mushrooms and Scallions, and Lemon Chicken with Ginger and Pine Nuts; paella and other rice dishes—and even a few pasta dishes; unusual vegetable preparations, including Sautéed Spinach with Quince and Toasted Sesame Seeds; and desserts like Basque Apple Custard Tart. Whether of Roman, Moorish, or peasant origin, all of the dishes appeal to today’s tastes and exemplify the virtues of the Mediterranean diet—lots of olive oil, lean meats and fish, and vegetables. Sidebars throughout discuss ingredients, areas of Spain unfamiliar to most Americans, travel vignettes, and more. At last, Americans can discover the unique and irresistible flavors of authentic Spanish home cooking in La Cocina de Mamá.… (more)

The Slow Mediterranean Kitchen: Recipes for the Passionate Cook by Paula Wolfert
Delicioso! The Regional Cooking of Spain by Penelope Casas
Paula Wolfert's world of food: A collection of recipes from her kitchen, travels, and friends by Paula Wolfert
Cooking from the Heart of Spain: Food of La Mancha by Janet Mendel
The New Spanish Table by Anya von Bremzen
15 more
Rao's Cookbook: Over 100 Years of Italian Home Cooking by Frank Pellegrino
The Basque Table: Passionate Home Cooking from One of Europe's Great Regional Cuisines by Teresa Barrenechea
Mediterranean Vegetables: A Cook's ABC of Vegetables and Their Preparation by Clifford A. Wright
Saveur Cooks Authentic Italian: Savoring the Recipes and Traditions of the World's Favorite Cuisine by editors of Saveur magazine
Saveur Cooks Authentic French: Rediscovering the Recipes, Traditions, and Flavors of the World's Greatest Cuisine by Colman Andrews
Mediterranean the Beautiful Cookbook: Authentic Recipes from the Mediterranean Lands by Joyce Goldstein
Catalan Cuisine by Colman Andrews
The Cooking of the Eastern Mediterranean: 215 Healthy, Vibrant, and Inspired Recipes by Paula Wolfert
Pleasures of the Vietnamese Table by Mai Pham
Dishes from the Wild Horse Desert: Norteño Cooking of South Texas by Melissa Guerra
Cradle of Flavor: Home Cooking from the Spice Islands of Indonesia, Singapore, and Malaysia by James Oseland
A Mediterranean Feast: The Story of the Birth of the Celebrated Cuisines of the Mediterranean from the Merchants of Venice to the Barbary Corsairs, with More than 500 Recipes by Clifford A. Wright
Cucina of Le Marche: A Chef's Treasury of Recipes from Italy's Last Culinary Frontier by Fabio Trabocchi
A Cowboy in the Kitchen: Recipes from Reata and Texas West of the Pecos by Grady Spears
Staff Meals from Chanterelle by David Waltuck
Fewer