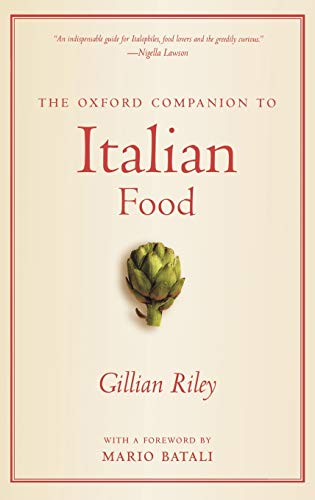 The Oxford Companion to Italian Food

Here is an inspiring, wide-ranging A-Z guide to one of the world's best-loved cuisines. Designed for cooks and consumers alike, The Oxford Companion to Italian Food covers all aspects of the history and culture of Italian gastronomy, from dishes, ingredients, and delicacies to cooking methods and implements, regional specialties, the universal appeal of Italian cuisine, influences from outside Italy, and much more. Following in the footsteps of princes and popes, vagabond artists and cunning peasants, austere scholars and generations of unknown, unremembered women who shaped pasta, moulded cheeses and lovingly tended their cooking pots, Gillian Riley celebrates a heritage of amazing richness and delight. She brings equal measures of enthusiasm and expertise to her writing, and her entries read like mini-essays, laced with wit and gastronomical erudition, marked throughout by descriptive brilliance, and entirely free of the pompous tone that afflicts so much writing about food. The Companion is attentive to both tradition and innovation in Italian cooking, and covers an extraordinary range of information, from Anonimo Toscano, a medieval cookbook, to Bartolomeo Bimbi, a Florentine painter commissioned by Cosimo de Medici to paint portraits of vegetables, to Paglierina di Rifreddo, a young cheese made of unskimmed cows' milk, to zuppa inglese, a dessert invented by 19th century Neapolitan pastry chefs. Major topics receive extended treatment. The entry for Parmesan, for example, runs to more than 2,000 words and includes information on its remarkable nutritional value, the region where it is produced, the breed of cow used to produce it (the razza reggiana, or vacche rosse), the role of the cheese maker, the origin of its name, Moli�re's deathbed demand for it, its frequent and lustrous depiction in 16th and 17th century paintings, and the proper method of serving, where Riley admonishes: "One disdains the phallic peppermill, but must always appreciate the attentive grating, at the table, of parmesan over pasta or soup, as magical in its way as shavings of truffles." Such is the scope and flavor of The Oxford Companion to Italian Food. For anyone with a hunger to learn more about the history, culture and variety of Italian cuisine, The Oxford Companion to Italian Food offers endless satisfactions.… (more)

The Oxford Companion to Italian Food by Gillian Riley (Hardcover)

The Oxford Companion to American Food and Drink (Oxford Companions) by Andrew F. Smith
Encyclopedia of Pasta (California Studies in Food and Culture) by Oretta Zanini De Vita
Carluccio's Complete Italian Food by Antonio Carluccio
The Oxford Companion to Food 2nd Ed by Alan Davidson
The Gastronomy Of Italy by Anna Del Conte
19 more
La Terra Fortunata: The Splendid Food and Wine of Friuli Venezia-Giulia, Italy's Great Undiscovered Region by Fred Plotkin
The Art of Eating Well: An Italian Cookbook by Pellegrino Artusi
Culinaria Italy by Guenter Beer
La Cucina: The Regional Cooking of Italy by The Italian Academy of Cuisine
Made in Italy: Food and Stories by Giorgio Locatelli
Food: A Culinary History (European Perspectives) by Jean-Louis Flandrin
The Food of Southern Italy by Carlo Middione
Claudia Roden's the Food of Italy: Region by Region by Claudia Roden
Dictionary of Italian Food and Drink by John Mariani
Umbria: Regional Recipes from the Heartland of Italy by Julia della Croce
Food: The History of Taste (California Studies in Food and Culture) by Paul Freedman
Flavors of Puglia by Nancy Harmon Jenkins
Foods of Sicily and Sardinia and the Smaller Islands by Giuliano Bugialli
Southern Italian Desserts: Rediscovering the Sweet Traditions of Calabria, Campania, Basilicata, Puglia, and Sicily by Rosetta Costantino
In Nonna's Kitchen: Recipes and Traditions from Italy's Grandmothers by Carol Field
Garde Manger: The Art and Craft of the Cold Kitchen (Culinary Institute of America) by The Culinary Institute of America
Italian Farmhouse Cookbook by Susan Herrmann Loomis
The French Menu Cookbook by Richard Olney
The Il Fornaio Baking Book: Sweet and Savory Recipes from the Italian Kitchen by Franco Galli
Fewer