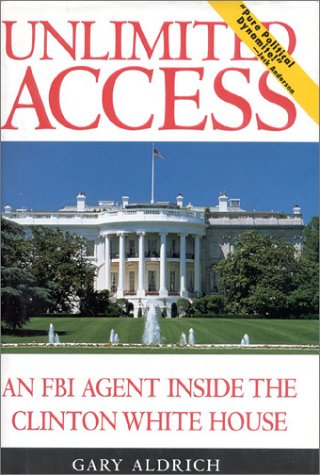 Unlimited Access : an FBI agent Inside the Clinton White House

FBI special agent Gary Aldrich thought he had a plum assignment. As one of only two FBI agents posted at the White House, he performed the background checks on White House appointees - a peaceful yet dignified way to close an eventful career spent nabbing mobsters, drug dealers, and white-collar criminals. Aldrich had little interest in politics. But he was concerned with the honor of the presidency and with national security. So what he witnessed in the first months of the Clinton administration left him deeply troubled. Then alarmed. Then angered. And finally, halfway through Clinton's term, so thoroughly outraged that he felt compelled in conscience to leave the FBI. Unlimited Access is Aldrich's electrifying expose of a presidential administration with a great deal to hide - and willing to put America at risk to keep it hidden. Aldrich describes how a comprehensive security system that had been perfected through six presidencies was systematically dismantled by the Clintons so they could bring their friends into the White House - friends that previous administrations would have barred because of serious ethical or legal problems, some prosecutable. Unlimited Access also sheds new light on such White House scandals as "Nannygate," "Travelgate" and the mysterious case of Vince Foster - whose true motive for committing suicide was revealed to Aldrich, in a secured vault, by White House security director Craig Livingstone. Throughout Unlimited Access, Aldrich relies on eyewitness testimony: his own, and that of other White House insiders. He concludes with a mock FBI "background report" on the President and First Lady themselves - a report that will surely come as deeply disturbing to every loyal, law-abiding American.… (more)

LibraryThing member wenegade
Where was all the corporate media whistleblower love when this explosive expose of the White House came out?
1 more
LibraryThing member CollectorOfAshes
It's easy to let the scandal of the day whitewash our horror at the past; fortunately, Aldrich is here to remind us of the systematic security breaches and the cultural rape that so epitomized the Clinton White House. I had forgotten about the roach clips as Christmas ornaments, and I never knew how deep the obstruction of justice went.

In any case, Unlimited Access is a fairly quick read, and only bogs down when it gets deep into the bowels of government complexity. The profanity is more prevalent than I care for, but fortunately descriptions of perversions are minimal. The report upon the Clintons themselves as if they had applied for security clearances is quite telling. There's still much about them that the public does not know.

This is book is critical in understanding the modern American political landscape.… (more)
Fewer

The Final Days: the Last Desperate Abuses of Power by the Clinton White House by Barbara Olson
The Agenda : inside the Clinton White House by Bob Woodward
High Crimes and Misdemeanors: The Case Against Bill Clinton by Ann Coulter
Shadow: Five Presidents and the Legacy of Watergate by Bob Woodward
A Matter of Character : Inside the White House of George W. Bush by Ronald Kessler
4 more
Inside the White House: The Hidden Lives of the Modern Presidents and the Secrets of the World's Most Powerful Institution by Ronald Kessler
Bias: a CBS Insider Exposes How the Media Distorts the News by Bernard Goldberg
Living History by Hillary Rodham Clinton
Deliver Us from Evil: Defeating Terrorism, Despotism, and Liberalism by Sean Hannity
Fewer