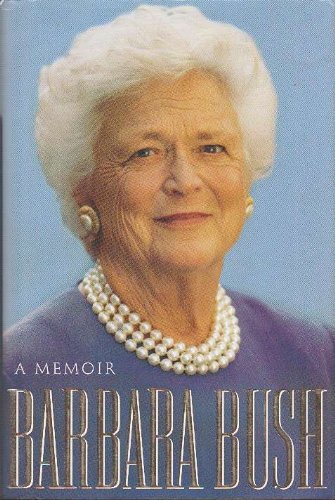 Barbara Bush is certainly among the most popular First Ladies ever to live in the White House. Politics aside, people worldwide have come to admire her wit, her candor and compassion, as well as her unswerving devotion to her husband and children. In her memoir, Mrs. Bush for the first time gives readers a very private look at a life lived in the public eye for more than twenty-five years. She begins with a compelling portrait of her early years, including: growing up in Rye, New York, and meeting George Bush; life as a young bride and mother, moving far away from home to West Texas; and the almost unbearable pain of losing a child. With contemporary American history as the backdrop, Mrs. Bush remembers the shock of learning that her fiance has been shot down in the Pacific during World War II; the disbelief when a black friend is refused service in a Southern restaurant in the 1950s; and the fear when she is caught in the middle of a student protest march in the 1960s. She recounts her years in public life, from first moving to Washington when George Bush was elected to Congress; to her experience living in New York as the wife of the Ambassador to the United Nations and in China as wife of the U.S. envoy. She talks candidly about the ups and downs of three presidential campaigns and describes her role as the wife of the Vice President, culminating in the climactic White House years. Drawing upon excerpts from her diary, which she has compiled for more than thirty years, Mrs. Bush takes us behind the scenes of the Persian Gulf conflict and the end of the Cold War. She talks about both the Bushes' struggle to overcome Graves' disease and how she faced the controversy that erupted at Wellesley College before her commencement speech. Through the friendships she developed over the years with world leaders and their spouses, we meet and get to know the Gorbachevs, the Thatchers, the Mitterrands, the Mubaraks, and many others. And she tells us why she threw so much of her energy and compassion behind the important cause of making more Americans literate. This memoir includes hundreds of the funny, often self-deprecating, and occasionally touching anecdotes for which Mrs. Bush is well known: surprising a rat while swimming in the White House pool; accidentally stomping on Boris Yeltsin's foot under the table during a state dinner; wearing a $29 pair of shoes for her husband's inaugural ball. She also talks about the disappointments of the 1992 presidential campaign and the joys of rediscovering private life, including driving and cooking again for the first time in twelve years. This is a warm and funny memoir that will charm Mrs. Bush's millions of admirers and earn her many more.… (more)

LibraryThing member lunza
What was fascinating about this book is what she didn't say. Like about George W. getting arrested for drunk driving. She said very little about the S&L scandal too, and mostly it boiled down to "Not MY little Neil!" But she said enough to make it clear that George W. is his mother's son in terms of personality. (Also, compare the photos of her as a child and young woman with photos of Jenna Bush. You know what Jenna will look like in 40 years.)… (more)
1 more
LibraryThing member lucymaesmom
What an interesting life (and an interesting read). Wondered at first why she didn't write more about George W but realized that when she wrote the memoir he was just another one of their kids and hadn't even gotten to gov. yet. Loved her relationship with her husband, and thought the behind-the-scenes stuff was fascinating.… (more)
Fewer

Decision Points by George W. Bush
Shadow: Five Presidents and the Legacy of Watergate by Bob Woodward
Going rogue : an American life by Sarah Palin
A Woman Named Jackie: An Intimate Biography of Jacqueline Bouvier Kennedy Onassis by C. David Heymann (1989-06-01) by C. David Heymann;
Keeping Faith: Memoirs of a President by Jimmy Carter
3 more
The Family: The Real Story of the Bush Dynasty by Kitty Kelley
When Character Was King: A Story of Ronald Reagan by Peggy Noonan
The Greatest Generation by Tom Brokaw
Fewer