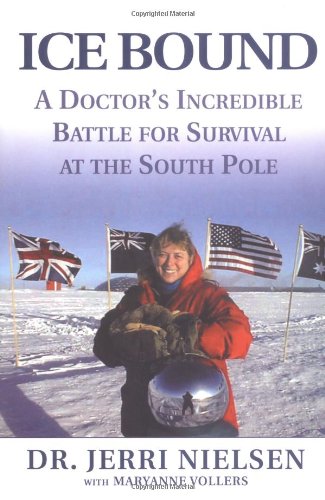 Ice Bound: A Doctor's Incredible Battle for Survival at the South Pole

The Antarctic winter, with temperatures 100 degrees below zero, shuts supply lines down completely; conditions are too treacherous for planes and boats and the only connection with the rest of the world is satellite hook-up. During the long winter of 1999, Dr. Nielsen, the only physician on a staff of forty-one people, discovered a lump in her breast. Consulting via satellite e-mail with doctors in the U.S., she was forced to perform a biopsy and in June began to treat herself with chemotherapy, in order to insure that she could survive until conditions permitted her rescue in October. A daring rescue by the Air National Guard ensued, who landed, dropped off a replacement physician, and in less than five minutes took off with Dr. Nielsen. Set in one of the most remote and desolate yet strikingly beautiful landscapes on earth, Jerri Nielsen's narrative of her transforming experiences is a thrilling adventure of researchers and scientists embattled by a hostile environment, a chronicle of marvels - and limits - of modern medical technology, and a penetrating exploration of the dynamics of an isolated, intensely connected community faced with adversity. But at its core this is a powerfully moving drama of one woman's voyage of self-discovery and courage and the fierce dedication of scores of colleagues - both known and unknown to her - whose aid proved to be her salvation.… (more)

LibraryThing member nancyewhite
This book provides the “behind the scenes” details of the experience of Jerri Nielsen who was diagnosed with and forced to treat her own breast cancer using non-medical personnel while she was the only doctor stationed at the South Pole during polar winter. Much of the book is about her experience of life at the pole and her relationships with her fellow “Polies”.

As someone who began reading this with very little knowledge of the South Pole station, I most enjoyed the information about what life is like there for the brave and crazy folks who opt to winter-over at the coldest place on earth. They are unreachable by even the most advanced aviation because jet fuel turns to Jell-o in the horrifically cold weather they experience. It was interesting to hear description of what they wore, where they slept, how they kept warm, how they entertained themselves and how they remained connected to the outside world. At the time of Dr. Nielsen’s employment (1999), they only had a satellite available for a few hours a day to exchange emails and contact with their friends and family. One interesting tidbit of information, while then-President Clinton visited New Zealand all usage of the satellite was reserved for him. I know so much about this because the book includes many emails. These are edited for length but otherwise replicated in their entirety. It becomes tiresome to read other people’s email including To, From, Subject etc., but in some ways provides the only true insight the book offers into the experience.

My personal response to this book is that I just don’t feel that Dr. Nielsen is a reliable narrator about her personal or interior life. Whether this is her fault or that of her co-author, I cannot say. I felt that she chose to take a stance as both victim and hero as opposed to just a regular old person in a horrible situation. Her descriptions of her relationships with her estranged children and ex-husband strike me as disproportionately favorable to her as do the descriptions of her childhood, parents etc. It may not be true that she considers herself either a victim or hero, but that is what I felt the “voice” used in the book implied. It feels somehow like she is being less than honest about her internal experience of the events described or rather that her level of honesty and experience has somehow been retarded so that she is having the emotional experiences that someone would normally have much earlier in their life than at 47 years old. When compared to a memoir written by someone like Mary Karr or Jeannette Walls or even Roseanne Barr, there is a noticeable lack of honest reflection and self-awareness that should have been addressed by an editor or the co-author who, one assumes, is a professional writer. There was a great deal of telling in a narrative that should have been laden with insight, feeling and action. This absence is particularly noticeable when reading the emails from Dr. Nielsen’s oncologist, Dr. Kathy Miller, which are filled with empathy, decency and passion. They give her a distinct “self” that no other person in the book has including Dr. Nielsen herself.

I can only recommend this book as an introduction to life at the South Pole. I intend to find other, better books to increase my knowledge of that fascinating place and the people who work there.… (more)
7 more
LibraryThing member tjsjohanna
Such interesting stuff about Antarctica! The story of Dr. Nielsen is almost secondary.
LibraryThing member Marlene-NL
Finished it last night Feb. 26.

Overall it was interesting, I liked to learn a bit more about how they lived there but after a while it became repetitive, all the talk about what they did daily, how much they loved each other and how much better they are than people not on the ice. (that was what I felt)

The first half of the book is about how they live there and just a little part is about the cancer.

Did she fall in love with a married man? was I the only one who noticed that? I do know when you live in close quarters you will fall in love quicker.… (more)
LibraryThing member oupelai
Amazing true story. This woman showed tremendous courage, but she also shared her fears and weaknesses with the reader, making this memoir hard to put down.
LibraryThing member jorowi
I can't really give this book a thorough review. My wife read it first and told me many of the details so I felt like I was reading it a second time.
LibraryThing member leslie.98
Really gets across the feeling of living at the Amundsen-Scott station at the South Pole. Easy to read.
LibraryThing member mahallett
i seem to have read 3 or 4 books about life in antartica. everybody seems to love it! not my cup of tea. i also remember this story from the newspaper and i remember a lot of press about her making it up.
LibraryThing member Grandeplease
The book cover proclaims "A doctor's incredible battle for survival at the South Pole." Indeed, the battle for survival is incredible and heartwarming.

The life Dr. Nielsen and her companions lived and others continue to live at the South Pole is described in fascinating detail.

The book is worth your time. However, I recommend skimming through any section of the book that seems to drag or you find annoying.

In my reading, I found the author's description of her circumstances and reasoning for her need to escape traditional civilization a bit annoying. In addition, some of the reprinted email exchanges added little if anything to the story - except weight to the book.… (more)
Fewer