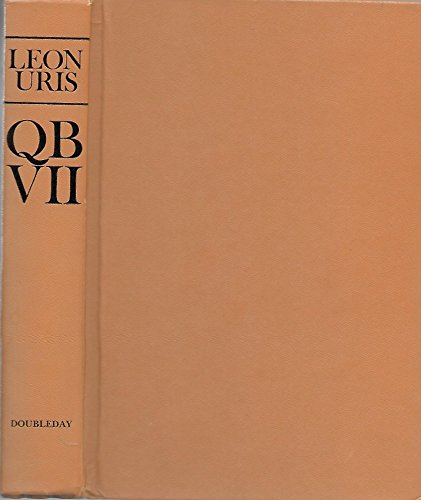 "You open the book and start reading. Quicker than you can say Uris you are caught up at once in the unfolding conflict. . . . It's a professional job all the way.. . dramatic, impassioned."--The New York Times Book Review In Queen's Bench Courtroom Number Seven, famous author Abraham Cady stands trial. In his book  The Holocaust--born of the  terrible revelation that the Jadwiga Concentration camp  was the site of his family's extermination--Cady shook the consciousness of the human race. He also named eminent surgeon Sir Adam Kelno as one of Jadwiga's most sadistic inmate/doctors. Kelno has denied this and brought furious charges. Now unfolds Leon Uris' riveting courtroom drama--one of the great fictional trials of the century. "A fine suspense story, an excellent courtroom story, written with genuine passion. You won't put it down once you've picked it up. It is the author of Exodus at his best."--Newsday… (more)

LibraryThing member fuzzi
This was my second read of a work by Leon Uris, and it was superb! In the first half of this book, the author introduces you to the two men who will eventually meet in court, "QB VII". Uris takes his time building so extensive a biography, that you really feel you know these people. I found myself having empathy for both Sir Adam Kelno and Abe Cady.

At the halfway point we are placed in QB VII court, with the barristers, judge, and jury, the plaintiff and defendant, and a sad assortment of witnesses. Due to the previously developed empathy, I felt strongly when the evidence came out, more so, I believe, because of the way the author introduced the characters in the first part of the book.

The court scenes are especially well-done, with plenty of tactics and terminology, and this book is highly recommended.… (more)
3 more
LibraryThing member ekcnho
I found this to be a page turner. It is the first Uris novel I've read. His style in this one is direct and quickly paced. Another reviewer says Uris is "not subtle" in this book, and I would agree, but did not find that to be a detriment. I didn't know anything about it when I picked it up in a used book store. The main theme is the actions in a Nazi concentration camp, but it also covers London, the English legal system, and British colonial Borneo. Finally, the structure of the book works well for the story.… (more)
LibraryThing member buffalogr
As I read this book, it seemed like a spinoff of Uris' book "Exodus" and after I researched it, I discovered that it was. Uris was sued in the same way by a Polish concentration camp survivor-- the facts essentially the same. So, he wrote a book about it and this one became a best seller. Half of the 13+ hour book is dedicated to introduction of the participants and the rest is the trial in Queens Bench Courtroom #7, hence the name QBVII. The plaintiff, Adam Kelno; the defendant Adam Cady (Uris). The latter had a history and behavior very similar to Uris, so in some respects, the book is an autobiography.… (more)
LibraryThing member HenriMoreaux
If not for the price of $1 I probably would have given this book a miss as the blurb is merely okay verging on being both bland and overloaded with information whilst the title is obscure and meaningless at a glance.

The title QB VII is a contraction for Queen’s Bench Court #7 within the High Court of Justice - had that been the title I would have been considerably more interested.

The book tells the tale of two sympathetic characters at odds over an assertion one participated in inhumane experimental surgery in the Jadwiga Concentration Camp in World War 2. As the story develops your sympathies change and your feelings/belief of innocence shifts as each division of the book tells the characters story separately.

The last half of the book is dedicated to the libel trial and is definitely the best part of the whole book, not only for those interested in court room wrangling, but also as it's where the prior character stories all come together.

I was a little disappointed the way the story seemed to waver for the second quarter but it certainly redeemed itself with the last half.