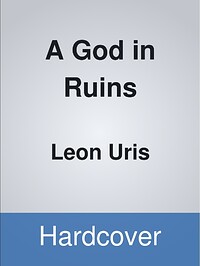 A God in Ruins

Master storyteller and international bestselling author of Redemption, Trinity, and Exodus, Leon Uris once again brilliantly interweaves historical fact with gripping fiction in this powerful novel of politics, family, intrigue, love, and the passions that rule human lives. Spanning the decades from World War II to the 2008 presidential campaign, A God in Ruins is the unforgettable story of Quinn Patrick O'Connell, an honest, principled, and courageous man on the brink of becoming the second Irish Catholic President of the United States. In an era morally unmoored, rife with armed separatists and fundamentalist zealotry, Quinn, the last great liberal of the Rocky Mountains, emerges as America's hope to reclaim its great past and its promises of the future. But Quinn is a man with an explosive secret that can shatter his political ambitions and threaten his life--a secret buried for over a half century that even he does not know.... Returning home at the end of World War II a decorated and wounded hero, Daniel Timothy O'Connell had moved his young wife, Siobhan, from the crowded streets of Brooklyn to the golden mountains of Colorado. Building a successful life as cattle ranchers, Daniel and Siobhan had everything they wanted--except a child. Desperate, they turned to the Church and adopted a beautiful three-year-old of mysterious parentage, a charming little boy they named Quinn Patrick. In riveting prose, Leon Uris unfolds Quinn's life as he matures from a restless youth into a brave Marine undertaking a deadly undercover mission, and finally, into an earnest, intelligent, and thoughtful leader willing take on the most vicious and malevolently destructive forces threatening the country. Here, too, are the two beautiful women who have always loved him--Greer, the lover driven by ambition and passion, and Rita, the sensuous, adoring daughter of his friend and mentor, painter and philosopher Reynaldo Maldonado. Through the years Quinn has made some powerful enemies who are determined to destroy him, including presidential incumbent Thornton Tomtree. A conservative computer mogul who built an electronic empire out of his father's Rhode Island junkyard, Tomtree is a right-wing pragmatist who will court the most dangerous and deadly elements of society and risk America s safety to achieve his own ambitions. From America's victorious past to its shadowed future, from the grandeur of Colorado's mountains to the enclaves of private militias hidden deep in the canyons of the Southwest's Four Corners, A God in Ruins races to a powerful, unforgettable conclusion. A sweeping novel of a man, a life, and a nation, it vividly brings to life memorable characters that will indelibly touch the heart and mind and illuminates the major crisis facing America at the dawn of a new millennium.… (more)

LibraryThing member DWWilkin
During a recent trip to the hospital, this book was handed to me to read and pass the time. A good opening had the potential to grab you. Leon Uris doesn't disappoint here. The shoo-in for the presidency in november's election, an orphan raised roman-catholic, finds one week before the election
Show More
that his birth-parents, both deceased, are Jewish.

That could be a great premise but then what... The story falls apart. Uris tries to create tension in our two party system in the US with the histories of not only the RC/Jew protagonist, but his rival who is the president. If that had been handled better, perhaps this book would succeed, but Uris has chosen his battlegrounds poorly. Republicans do not do everything poorly in regards to the nation, but in God in Ruins Republicans always fail.

Democrats always succeed, and where we have some true named places and people, and ambiance, too much fictionalized that you have to read (AMERIGUN-is the NRA, Charlton Heston is their president so an Actor leads AMERIGUN...) throws the book into that thinly disguised type of clap trap.

The writing style of Uris also fails. People, all even the dumb ones, are too smart, for the use half sentences to talk to one another. Always full of depth of meaning. Our leaders maybe that smart, but I doubt it. Some of them are geniuses, some are charismatic dilettantes in reality, which Uris does not portray. All his politicians are brilliant.

So the story fails. It could have been good. It wasn't.
Show Less
2 more
LibraryThing member junebedell
I was surprised at how prophetic this book was, having been published in 1999. The main character, a Marine through and through, finds himself and his squad on a "find and snatch" mission in Iran that is eerily similar to the 2011 mission to get Bin Laden. Then, there is the struggle against
Show More
AMERIGUN (read NRA) organization and the attempt to pass meaningful legislation on gun control in this country. Go figure!
Show Less
LibraryThing member DeanClark
Couldn't quite finish it. Reads like an effort to be the Great American Novel.
Fewer