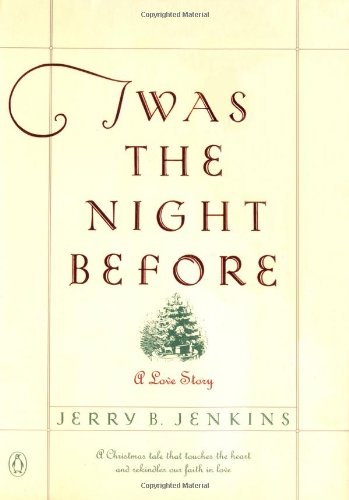 Twas the Night Before: A Love Story

by Jerry B. Jenkins

Writer of the phenomenally successful Left Behind series, Jerry Jenkins has now given us a heartwarming book about the meaning of Christmas. Noella, a journalism professor at Northwestern University, and Tom, a reporter for the Chicago Tribune, are engaged to be married. After several failed relationships, they believe they have finally found true love. As Christmas approaches, though, they come up against a basic difference in their temperaments. When Noella insists that a medallion she received as a child was actually from Santa Claus, Tom bah-hum-bugs it, and, sadly, they realize they are just too dissimilar to get married. However, while in Germany on assignment to write about the Father of Christmas, Tom makes a discovery that restores his faith in much more than Santa.'Twas the Night Before is a spellbinding love story that will join O. Henry's "Gift of the Magi," Dickens' A Christmas Carol, and Frank Capra's film It's a Wonderful Life as a Christmas classic that will bring romance, good cheer, and hope to the season.… (more)

LibraryThing member judyg54
This was a story that caught me be surprise near the end (which is usually a good thing). It is a story of a couple who fall into the category of "opposites attract" because Noella is a journalism professor and a kind hearted, everybody-loves-her type person, and Tom is a reporter for the Chicago Tribune and a bah-humbug type of guy. But they meet and fall in love and then have a devastating break-up because of Christmas (I am not going to ruin the surprise of what that involved). Anyways the rest of the story takes you on a journey that took me by surprise. It is a very well done story and fun to read around Christmas, but for those who know the true meaning of Christmas, there is nothing mentioned about a babe born in a manger or any other spiritual references. I read it, enjoyed it, thought it was a cute story, but as fiction goes, realize there is no truth behind this story. And with that, I will leave you to discover the "mystery" behind this review.… (more)