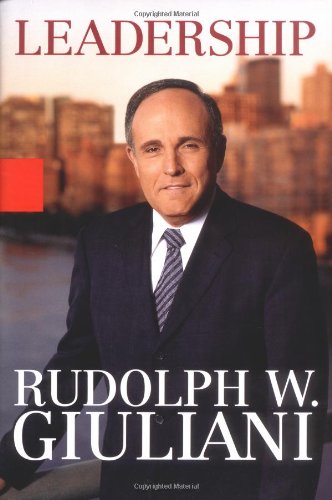 Rudolph Giuliani demonstrates in [this book] how the leadership skills he practices can be employed successfully by anyone who has to run anything. After all, until the September 11 attacks on the World Trade Center pushed him into an unwanted role in history, Giuliani was only months away from leaving office with a reputation as one of the most effective mayors New York had ever seen. Having inherited a city ravaged by crime and crippled in its ability to serve its citizens, Giuliani shows how he found that every aspect of his career up to that point from clerking for the formidable judge who demanded excellence (and rewarded it with a lifetime of loyalty) to busting organized crime during his years as a federal attorney shaped his thinking about leadership and prepared him for the daunting challenges ahead. Giuliani's successes in turn strengthened his conviction about the core qualities required to be an effective leader, no matter what the size of the organization, be it an international corporation or a baseball team. In detailing his principles of leadership, Giuliani tells captivating stories that are personal as well as prescriptive: how he learned the importance of staying calm in the face of attack from his father's boxing lessons as well as the need to stand up to bullies; how a love of reading was early instilled in him by his mother and grew into a determination to master new subjects, and not rely on only the word of experts; how, in his recent fight with prostate cancer, learning to make decisions at the right time and with the right information reflected decision-making on a larger scale. [In the book], Giuliani writes, works both ways: it is a privilege, but it carries responsibilities from imposing a structure suitable to an organization's purpose, to forming a team of people who bring out the best in each other, to taking the right, unexpected risks ... He never knew that the qualities he describes would be put to the awful test of September 11, he says; but he never doubted that they would prevail.-Dust jacket.… (more)

Principle-Centered Leadership by Stephen R. Covey
Decision Points by George W. Bush
When Character Was King: A Story of Ronald Reagan by Peggy Noonan
Bias: a CBS Insider Exposes How the Media Distorts the News by Bernard Goldberg
Deliver Us from Evil: Defeating Terrorism, Despotism, and Liberalism by Sean Hannity