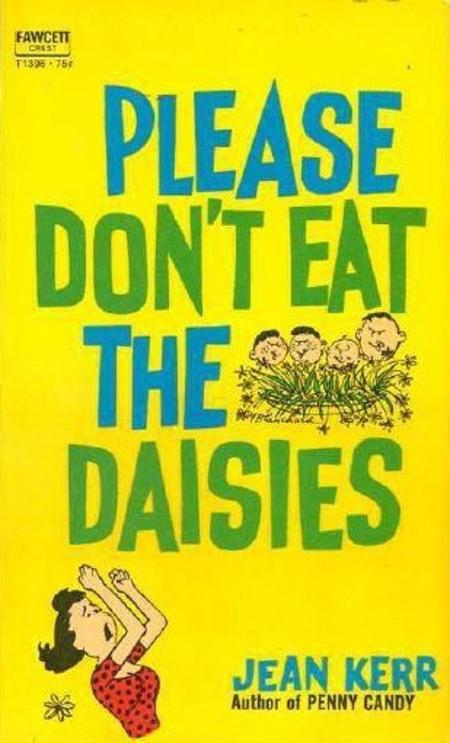 The "refreshing . . . laugh-out-loud" #1 New York Times bestseller about life in the suburbs that was adapted into a classic film comedy (Kirkus Reviews).   One day, Tony Award-winning playwright Jean Kerr packed up her four kids (and husband, Walter, one of Broadway's sharpest critics), and left New York City. They moved to a faraway part of the world that promised a grassy utopia where daisies grew wild and homes were described as neo-gingerbread. In this collection of "wryly observant" essays, Kerr chronicles her new life in this strange land called Larchmont (TheWashington Post).   It sounds like bliss--no more cramped apartments and nightmarish after-theater cocktail parties where the martinis were never dry enough. Now she has her very own washer/dryer, a garden, choice seats at the hottest new third-grade school plays (low overhead but they'll never recoup their losses), and a fresh new kind of lunacy.   In Please Don't Eat the Daisies "Jean Kerr cooks with laughing gas" as she explores the everyday absurdities, anxieties, and joys of marriage, family, friends, home decorating, and maintaining a career--but this time with a garage! (Time).… (more)

LibraryThing member MerryMary
For some reason, Jean's humor appeals to me on a very basic level. Perhaps because I first read her essays as a young teen when my admittedly warped sense of humor was being formed! The essays in this book deal with children, playwriting, dogs, and other hazards of life. Love it!
7 more
LibraryThing member JonRob
Entertaining set of essays by Ms. Kerr about her life with drama critic Walter Kerr. It's a bit on the thin side, and must have required extremely creative handling by the writers who made it into a movie (which I haven't seen, so can't help wondering if they included the parodies of Francois Sagan and Stephen Vincent Benet) but still stylish enough to be re-readable occasionally.… (more)
LibraryThing member MrsLee
This is a collection of humorous essays written by Jean Kerr in the late 1950's early 1960's. I didn't find it hilarious, at least not all the way through, but I certainly chortled, snorted and giggled, and several parts on child-rearing had to be read aloud to my long-suffering husband. Thought the idea for the Dramatic Reading of a hard-boiled mystery was terrific! It seemed a bit randomly put together, but I suppose that is the nature of a collection of essays.… (more)
LibraryThing member tloeffler
Although dated, Jean Kerr's essays are spot on about raising children and home repairs. She is as funny now as she was when I first read her when I was a teenager.
LibraryThing member sweet_pinkette
This is a hilarious book about motherhood, wifehood, womanhood and more by Jean Kerr. Her wit and wisdom are poured throughout this book. It is one of my all-time favourites.
LibraryThing member burnit99
This collection of humorous pieces, mostly revolving around the author's family, led to a family TV comedy that I have vague recollections of. The author's style reminds me of nobody so much as the late Erma Bombeck (who may well have read and been inspired by this book), but with a few exceptions, Jean Kerr's humor is better-written, with a nice light satirical touch and a nice sense of pace. The exceptions are the few pieces about her experiences as a playwright; they just didn't do it for me. But the family pieces are giggly gold. The title comes from her lamentation about not having the imagination to give her three young boys precise enough instructions about what acts of mischief not to commit.… (more)
LibraryThing member fefferbooks
Was one of those random books in our house as a kid, probably a hand-me-down from my grandmother, and though I thought several of the stories were funny then, the older I get and the more children I have, the more hilarious they are.
LibraryThing member jburlinson
So funny I almost smiled a couple of times. The movie was better.
Fewer

When You Look Like Your Passport Photo, It's Time to Go Home by Erma Bombeck
Marjorie Morningstar by Herman Wouk