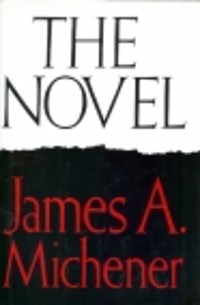 The Novel: A Novel

by James A. Michener

In this riveting, ambitious novel from James A. Michener, the renowned chronicler of epic history turns his extraordinary imagination to a world he knew better than anyone: the world of books. Lukas Yoder, a novelist who has enjoyed a long, successful career, has finished what he believes to be his final work. Then a tragedy strikes in his community, and he becomes obsessed with writing about it. Meanwhile, Yoder's editor fights to preserve her integrity--and her author--as her firm becomes the target of a corporate takeover; a local critic who teaches literature struggles with his ambitions and with his feelings about Yoder's success; and a devoted reader holds the key to solving the mystery that haunts Yoder's hometown. nbsp; Praise for The Novel nbsp; "Michener explores some of the deepest issues raised by narrative literature."--The New York Times nbsp; "A good, old-fashioned, sink-your-teeth-into-it story . . . The Novel lets us see an unfamiliar side of the author, at the same time portraying the delicate, complex relationship among editors, agents and writers."--The Philadelphia Inquirer nbsp; "Michener loves literature, and his information about some of his favorite reading is almost as alluring as his explanation of how to handle a manuscript."--Associated Press nbsp; "So absorbing you simply will not want [it] to end."--Charleston News & Courier… (more)

LibraryThing member santhony
Absolutely nothing special. Disappointing having come from Michener.
8 more
LibraryThing member labwriter
I enjoy writers writing about writing. This is a good example. It's not deathless prose, and it's not meant to be. It's an entertaining read.
LibraryThing member wenestvedt
The story, from four points of view, of one novel's writing. Set in Pennsylvania Dutch country. A gift from mom. Quite good.
LibraryThing member kyleblack
A great story for anyone who enjoys the world of writing or even reading for that matter. However, after the first 'book' which follows the life of the books novelist, the following characters the editor, the critic and the reader are more and more just devices to keep the novels structure moving.
Show More
As a Berks County native (the books setting) I can vouch for Michener's accurate portrayal of the landscape and the people. Overall, not the greatest book I've ever read but a nice ride through the world of writing and publishing, with all the intrigues and struggles of perhaps more action oriented books.

B/C
Show Less
LibraryThing member BryanThomasS
This is average Michener, but still worthwhile. About a writer's life, which he knew well. I should reread it myself now that I am more active as an author.
LibraryThing member susandennis
Anyone who loves reading books needs to read this. For some time now, in addition to reading books the normal way, I've been listening to one novel or another on tape (the full, unabridged versions rented from Books On Tape) in the car going to and from work. I don't know why, but I haven't
Show More
reviewed any of them here. But, this one was so outstanding that I couldn't not tell you about it. Michener tells the tale in the early 90's in four parts - the first is the perspective of the novel author, then the editor. The third part is the literary critic and the fourth is the reader. Each is a fully developed character and story on it's own but they all weave together. The end result articulates perfectly why my life would be so flat and impoverished without books.
Show Less
LibraryThing member maryreinert
This is not the typical Michener book. Basically this is a book about writing and publishing a book as told by a variety of characters. Frist - the writer: Lucas Yoder, a Mennonite writer in Pennsylvania who has achieved much success with his stories set in Pennsylvania Dutch country. Second,
Show More
Yvonne Marmette, his editor in New York City. Yvonne's back story involves a troubled marriage during a rising career. Third, the critic - Karl Streibert, a young man also from the Pennsylvania Dutch country who achieves success as a literary professor and critic in nearby Mecklenbery College. Lastly, Jane Garland, an elderly wealthy woman who loves Yoder's books and is a benefactor at the college.

The idea of reading the back story of these people was really good - what I didn't like was a murder of Jane's very talented grandson thrown in during the last chapter.

I felt much of this book was to explain the process of writing and publishing which was interesting and most of the characters were believable. The author just got off line during the last section by trying to pull too much together. Still a pretty good read with lots of references to literature and authors.
Show Less
LibraryThing member keylawk
James Michener the novelist, writes a novel about novel-making. This reality fiction suspense story takes place in the 20th century college campus and a rural barn village in real life Berks County. Many families are Mennonites, Pennsylvania Dutch (Germans). The publishing takes place with Jews and
Show More
offshore corporations, where the editor is from New York City. Michener weaves accurate information about these locales into the story.

Lukas Yoder is a successful novelist writing what he believes will be his last book. He is also a painter -- with a folkloristic "Shunning", and "Hex series" -- as well. Then, he is utterly distracted by the fact that a violent tragedy takes place in the community. Interestingly, Yoder understands this as a chance to write "a new kind of fiction". [388,431] Show how the "stolid, unyielding ways of the Dutch could produce a murderer". [434] But he would marry the new skills -- action without explanations, realistic dialogue -- to the old craft of simple story-telling.

After the brutal murder, the literate grandmother tries to read her comforting literature, and "a frightening thing happened". She realized that the familiar lines of Longfellow no longer had the vitality and relevance they once had. She realizes she faces a prospect of seeing "better and better novels read by fewer and fewer people", herself included. [438] But Michener provides a return to the Writer in a quiet moment, as he answers the mail he receives from...readers.

This book is written in the voices of the four roles critical to fiction -- the writer, the editor, the critic, and the reader. We learn that a Professor Streibert, at the local Mecklenberg College, the "critic" in this book , writes a review which raises a storm among some of the readers. The readers include the President and members of the Board of the College. Great dialogues between women "who prefer books that can be read, against you and Streibert, who advocate books that nobody can read!" And the critic's student defender is ironically penning a new work with the title "DIALOGUE". Excerpts are provided.

The critic regales us with which four English writers can teach the "secrets of meaningful narration". [203] Which four classic English are "entertaining" but provide no substance. [204] And "who would you choose, and why?"

One of the most important perspectives a writer must understand is the drill which the critics--who genuinely believe novels are "treasure beyond compare". [220] (To understand this, it helps to have brilliant company on a whirlwind tour of Rome, through Venice and Greece, followed by a live performance of the Agamemnon trilogy--all of which are provided here.) It also reminded me of how much "civilization" owes to people who are gay.

A trifecta of "love" stories is woven into the suspense, providing additional tension in a subtle way -- subtle because well-developed characters are boldly projected outside of the expectations of small-town or college proprieties. The expert on literature, who has the most to teach us, is clearly fabulous but not ridiculous. I am trying to remember if Michener ever actually uses a label -- "gay".

Michener deals with loneliness -- the subject at the heart of Thomas Wolfe's neomodern bildungsroman, "Look Homeward, Angel". Michener sets the stage with various characters finding themselves lonely, as the Christmas season opens up for New Years' Eve. Older man/younger woman, visa versa. The long-term bond with a strong-willed woman which enabled the Writer to focus on his work. Excitement of dreams fulfilled. AIDs brings death but there is the peace of having been loved. A dear old widow helping young career-woman find romance. We find heart-break, and the joys of good companionship.

We even get a white-knuckle detailed account of investment bankers taking over a publishing house without the publishers actually knowing they were doing it. [330]

Nota bene--Michener is presciently spelling out how ten thousand writers can step up and investigate the way rich predators pirated the greatest hoard of wealth in the world in 2008. In the decade after this book was written, bankers securitizing worthless "investment products" removed $40 trillion from the American middle class. Remember the "Bonfire of Vanities" by the other "Wolfe" of Wall Street, Tom Wolfe? We did not "get it" did we! Michener even suggests some working titles -- "Murder of a Publisher", or "Assassination of an American Business", or "Kidnapping the Economy", or "Killing Kinko's" etc. So he tells us how to do it and we have a trillion-dollar crime to write about!

The critics' student defender is the reader's son. He is articulate and talented: "In a time of growing cultural darkness, men like Streibert--in Universities across the nation--are beginning to believe that the job of serious fiction is to maintain a dialogue of exalted meaning among the elite--the rare few who will be making the decisions that will keep society alive." [350] As Ezra Pound expounded, "Ignore the general public. They always follow false gods." And further, a kind of "blinding light" is cast on Pound's treason. [389]

Michener tells us about other novels and "stories" in world literature and about the craft of writing. You don't really understand the sharpness of the need for style in writing, until you read what goes on among the editors, critics, and readers. And the industry of publishing. "In our league it's not completed till it's published..." [381] Also about making pies -- bits of ham in lemon meringue. [383].

And in addition to authentic clipped dialect, much about the culture and belief-worship of the Mennonite and local community: "I was reminded that Christmas in America was essentially a German tradition and that only the Pennsylvania Dutch knew how to celebrate it properly." [430] An indictment of the empty materialist ritual of wrapping gifts made in China.

Michener reveals the "secret" of the Writer: "he became the people he wrote about, lived in their skins, suffered in their hearts, shared their mental confusion". [430] That is not a spoiler, you knew it already.

In the final chapters, a female book reader narrates from her journal the sad mystery of the events that brutalized the Pennsylvania Dutch community. A brilliant writer is murdered, with defensive wounds on his body. [394] His family seek to complete his unfinished novel. The circumstances in this community actually CALL for this novel to be written, and we are placed AT that call. The police have no clues. [405] But a close examination of a barn hex collected for Art, reveals a somewhat hidden gash--"frakture" -- that points to the murderer.

In a gentle ending we find exactly the launch point, and the mapping, and the absorption that is required behind The Novel. And...the love.

~~~~~~~~~~~
Michener died in 1997, a full decade before his beloved country and world were destroyed by the 2001-2009 economic plunder of criminal monopolists. He was one of the great liberals whose mighty shoulders built an exceptional civilization. More than a mere writer, he was teacher, investigator, and fighter for justice. Each of his 43 books stand as an ax-blow against tyranny, ignorance, and idiocy. His axe is never dull.
Show Less
LibraryThing member junebedell
Liked this one alot. Tells the story of creating a book from the perspectives of the writer, editor, critic, and reader. I'll say no more.
Fewer