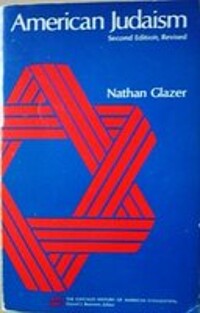 The Chicago History of American Civilization

First published in 1957, Nathan Glazer's classic, historical study of Judaism in America has been described by the "New York Times Book Review" as "a remarkable story . . . told briefly and clearly by an objective historical mind, yet with a fine combination of sociological insight and religious sensitivity." Glazer's new introduction describes the drift away from the popular equation of American Judaism with liberalism during the last two decades and considers the threat of divisiveness within American Judaism. Glazer also discusses tensions between American Judaism and Israel as a result of a revivified Orthodoxy and the disillusionment with liberalism. ""American Judaism" has been arguably the best known and most used introduction to the study of the Jewish religion in the United States. . . . It is an inordinately clear-sighted work that can be read with much profit to this day."-- "American Jewish History" (1987)… (more)

A Certain People: American Jews and Their Lives Today by Charles E. Silberman
Jew vs. Jew: The Struggle for the Soul of American Jewry by Samuel G. Freedman
Judaism as a Civilization: Toward a Reconstruction of American Jewish Life by Mordecai Menahem Kaplan
Jewish People, Jewish Thought: The Jewish Experience in History by Robert M. Seltzer
A History of the Jewish Experience Book 1, Torah and history : Book 2, Torah, mitzvot, and Jewish thought by Leo Trepp
18 more
Great Jewish Thinkers of the Twentieth Century Edited with introductory essays by Simon Noveck
Where Are We? The Inner Life of America's Jews by Leonard J. Fein
Gates of Mitzvah: A Guide to the Jewish Life Cycle by Simeon J. Maslin
Sabbath: The Day of Delight by Abraham Ezra Millgram
Does the World Need the Jews? Rethinking Chosenness and American Jewish Identity by Daniel Gordis
The Jews in America: The Roots, History, and Destiny of American Jews by Max I. Dimont
The Purim Anthology by Philip Goodman
On Women and Judaism: A View from Tradition by Blu Greenberg
The Yom Kippur Anthology by Philip Goodman
The Sukkot/Simhat Torah Anthology by Philip Goodman
The Jews in America by David Cohen
Sacred Fragments: Recovering Theology for the Modern Jew by Neil Gillman
Profiles in American Judaism: The Reform, Conservative, Orthodox, and Reconstructionist Traditions in Historical Perspective by Marc Lee Raphael
The Jews in America: Four Centuries of an Uneasy Encounter by Arthur Hertzberg
The Third Jewish Catalog: Creating Community by Sharon Strassfeld
The Vanishing American Jew: In Search of Jewish Identity for the Next Century by Alan M. Dershowitz
The Rosh Hashanah Anthology by Philip Goodman
Bar-Kokhba: The Rediscovery of the Legendary Hero of the Second Jewish Revolt Against Rome by Yigael Yadin
Fewer