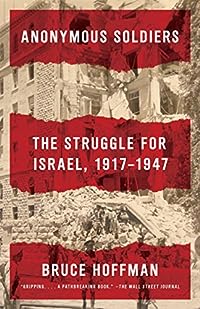 A landmark history, based on newly available documents, of the battles between Jews, Arabs, and the British that led to the creation of Israel "Anonymous Soldiers" brilliantly re-creates the crucial period in the establishment of Israel, chronicling the three decades of growing anticolonial unrest that culminated in the end of British rule and the UN resolution to create two separate states. This groundbreaking book tells in riveting, previously unknown detail the story of how Britain, in the twilight of empire, struggled and ultimately failed to reconcile competing Arab and Jewish demands and uprisings. Bruce Hoffman, America's leading expert on terrorism, shines new light on the bombing of the King David Hotel, the assassination of Lord Moyne in Cairo, the leadership of Menachem Begin, the life and death of Abraham Stern, and much else. Above all, Hoffman shows exactly how the underdog "anonymous soldiers" of Irgun and Lehi defeated the British and set in motion the chain of events that resulted in the creation of the formidable nation-state of Israel. This is a towering accomplishment of research and narrative, and a book that is essential to anyone wishing to understand not just the origins of modern-day Israel or the current situation in the Middle East, but also the methodology of terrorism. Drawing on previously untapped archival resources in London, Washington, D.C., and Jerusalem, Bruce Hoffman has written one of the most detailed and sustained accounts of a terrorist and counterterrorist campaign that may ever have been seen, and in doing so has cast light on one of the most decisive world events in recent history. This will be the definitive account of the struggle for Israel for years to come. "From the Hardcover edition."… (more)

LibraryThing member neddludd
Terror today is endless. However in the period of the 1930s and 1940s, a small number of committed individuals sought to achieve a specific goal: an independent Israel and an end to British rule under its League of Nations mandate. Actual terrorists were but a fraction of the total Jewish
Show More
population of Mandate Palestine but they caused so much of a threat that by the mid-1940s the UK had stationed 100,000 troops in the nation, hid behind barbed wire and concrete fortifications, and created a Guantanamo-style prison in Kenya and Eritrea where suspected and actual terrorists could be held indefinitely without trial or appeal. At the end of WWII, for a period of time, Britain sought to maintain its pre-war hegemony and empire. But it was too exhausted fiscally and politically and the aim of using Palestine as a base by which India could be safer was a pipe dream--given the Indian thrust for independence. In the U.S., many people sympathized with the Israeli terrorists, and full-page fundraising letters (published in leading newspapers) were written by such famous individuals as Ben Hecht. Truman sought to push the British toward partition as well by supporting the immediate entry to Israel of 100,000 Holocaust survivors caught in European displaced persons camps. Britain, like the U.S. in Vietnam, was a pitiful helpless giant and here are the cables, correspondence, and insights that powered a successful terror campaign and the failed attempts to stop it. Probably a definitive work.
Show Less

Lioness: Golda Meir and the Nation of Israel by Francine Klagsbrun
A History of Israel: From the Rise of Zionism to Our Time by Howard Morley Sachar
Like Dreamers: The Story of the Israeli Paratroopers Who Reunited Jerusalem and Divided a Nation by Yossi Klein Halevi
The Lion's Gate: On the Front Lines of the Six-Day War by Steven Pressfield
My Promised Land: The Triumph and Tragedy of Israel by Ari Shavit
5 more
The Prime Ministers: An Intimate Narrative of Israeli Leadership by Yehuda Avner
Myths and Facts: A Guide to the Arab-Israeli Conflict by Mitchell G. Bard
Rise and Kill First: The Secret History of Israel's Targeted Assassinations by Ronen Bergman
Rebbe: The Life and Teachings of Menachem M. Schneerson, the Most Influential Rabbi in Modern History by Joseph Telushkin
Jabotinsky: A Life by Hillel Halkin
Fewer