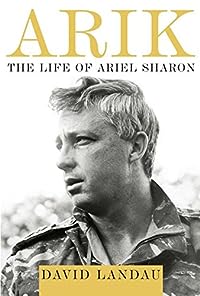 Arik: The Life of Ariel Sharon

From the former editor in chief of Haaretz, the first in-depth, comprehensive biography of Ariel Sharon, the most dramatic and imposing Israeli political and military leader of the last forty years. The life of Ariel Sharon spans much of modern Israel's history. A commander in the Israeli Army from its inception in 1948, Sharon participated in the 1948 War of Independence, played decisive roles in the 1956 Suez War and the Six-Day War of 1967, and is credited here with the shift in the outcome of the Yom Kippur War of 1973. After leaving the professional army, Sharon became a political leader and served in numerous governments, most prominently as the defense minister during the 1982 Lebanon War in which he bore "personal responsibility," according to the state's commission of inquiry, for massacres of Palestinian civilians by Lebanese militia. As a general and as a politician, he championed the construction of Israeli settlements in the occupied West Bank and Gaza. But as prime minister, he performed a dramatic reversal- orchestrating Israel's unilateral disengagement from the Gaza Strip. Landau brilliantly chronicles Sharon's surprising about-face, combining the immediacy of firsthand reportage with the analysis and independent insight of a historian's perspective. Sharon suffered a stroke in January 2006 and remains in a persistent vegetative state. This biography recounts the life of the man who is considered by many to be Israel's greatest military leader and political statesman, illustrating how Sharon's leadership transformed Israel, and how his views were shaped by the changing nature of Israeli society. From the Hardcover edition.… (more)

LibraryThing member maimonedes
This new biography of Ariel Sharon is the work of the well-known London-born Israeli journalist, the late David Landau. Landau, who sadly died just after his book was published, had been the editor of Israel's left-wing newspaper Ha'arets and founder of its English edition. For someone so
Show More
unequivocally opposed to Israel's settlements on the West Bank, and such a prominent advocate for their removal, it might seem strange that Landau would choose to write a biography of Sharon, the man who is usually thought of as the major force behind the settlement movement. A careful reading of this book dispels the mystery.

The life story that the author paints is couched very much as a “history of salvation”, of a talented but flawed man, who was led into error by his own willful personality and the bad influence of others, before seeing the light and repenting. The author is at pains to show that Sharon was never really ideologically a man of the right; he was motivated purely by a need to command and have his own way – initially in the context of his army career, and then by advancement in politics. The author paints a picture of someone who would join whatever side would best advance his own personal aims. It was only Sharon’s forced retirement from the army in 1972, and the end of his hopes of ever becoming Chief of Staff, that was the real cause of his move to Likud, the party of Menahem Begin. It allowed him to rationalise the end of his military career as being the result of his political opposition to the Labor establishment.

Sharon temporarily abandoned his political career in 1974 to become Defense advisor to the new Labor Prime Minister, Yitzhak Rabin, with whom he had very good relations. It was during this period that Sharon played a key role in the development of the settlement movement in the West Bank. But, as the author is keen to point out, this was as much a policy of the Labor government then, as it later became one of the Begin government. In other words, Sharon was no more rightist than Rabin, the man who would sign the Oslo accords 20 years later.

The chapters that describe Sharon’s role in Begin’s government are a bleak and unforgiving read. Under the baleful influence of Begin stoking his “dangerous fantasies”, Sharon’s expansion of Jewish settlement to the whole of the West Bank went ahead unchecked. The only gleam of light in this unrelenting gloom is Sharon’s efficient handling of the withdrawal from the settlements in the Sinai, a condition of the 1979 Israeli/Egyptian peace treaty, which the author sees as a rehearsal for the much larger withdrawal from Gaza masterminded by Sharon 25 years later. For the author this is a portent of what will be Sharon’s future salvation, when he finally understood that the settlement enterprise was a “fateful national blunder” and set out to correct it towards the end of his life.

The author faithfully documents the evidence, from both Sharon’s critics and his supporters, about his role as defense minister during Israel’s ill-fated 1982 invasion of Lebanon. Did Sharon deceive Begin about the scope of the invasion? Could he have anticipated and prevented the massacres by Christian militias in the Palestinian refugee camps? Despite Sharon’s history of ignoring or going beyond orders when he was a soldier, the author states his belief in his innocence of agency “Once again… Sharon was the executor of the policy ….not its conceiver or its instigator.” Begin again was the malign influence behind Sharon’s errors.

Landau identifies the turning-point in Sharon’s return to grace - his transformation from hawk to dove - as his 1997 role in the delicate negotiations with Jordan to resolve the crisis precipitated by the Mossad’s bungled attempt there on the life of a senior Hamas operative. During this stage in his career – when he eventually became Benjamin Netanyahu’s foreign minister - Sharon’s behind the scenes actions were often at variance with his public stance, including his continuing robust support for the expansion of existing settlements. Landau believes that Sharon’s visit, as leader of the opposition, to the Temple Mount was “history-changing”, the trigger for the outbreak of the second Palestinian uprising in September 2000. However he also maintains that, by the time that he became Prime minister in March 2001, Sharon - in the light of Ehud Barak’s failed peace efforts - had become convinced that unilateral actions, aimed at separating Israelis from the Palestinian population, were the only way forward. Contrary to fears - both in Israel and around the world – that Sharon’s premiership would see a more aggressive Israeli response to the Palestinian uprising, Sharon appeared to be a model of judicious restraint. The man and his image seemed to have converged again in a different place.

The next 5 years of Sharon’s premiership - and the final ones of his active life – are recounted with great detail and high drama. Two threads are intertwined; the multiplication of his personal legal problems – the investigation of illegal contributions to campaign financing and accepting bribes - and the dramatic announcement of his intention to disengage from Gaza, removing all the settlements and withdrawing the IDF. Was the latter just a tactic to preempt the ever-advancing legal net that threatened to envelop him and his sons? Landau believes not; ”this was an integral part of his steady shift from dogmatism to realism …and would have led, had he remained healthy, to sweeping withdrawals from the West Bank too.”

Because of his own deeply held belief about the folly of Israeli settlement of the West Bank and Gaza, Landau’s interpretation of his subject’s whole life is coloured by the one act – his withdrawal from Gaza - that proved to be his last. Rather than as a series of often contradictory episodes without any guiding principles other than self-promotion, Landau sees Sharon’s erratic path from warlord to peace-maker as an inevitable and redemptive progression, tragically truncated before reaching its final conclusion – complete Israeli withdrawal from the West Bank. You don’t however have to agree with the author’s views to appreciate this work, which embodies the highest standards of contemporary biography; it is a grand story grandly told.
Show Less

The Prime Ministers: An Intimate Narrative of Israeli Leadership by Yehuda Avner
Personal Witness: Israel Through My Eyes by Abba Solomon Eban
My Life by Golda Meir
Anonymous Soldiers: The Struggle for Israel, 1918-1947 by Bruce Hoffman
The Missing Peace: The Inside Story of the Fight for Middle East Peace by Dennis Ross
11 more
A History of Israel: From the Rise of Zionism to Our Time by Howard Morley Sachar
Like Dreamers: The Story of the Israeli Paratroopers Who Reunited Jerusalem and Divided a Nation by Yossi Klein Halevi
Lioness: Golda Meir and the Nation of Israel by Francine Klagsbrun
The Seventh Million: The Israelis and the Holocaust by Tom Segev
Golda by Elinor Burkett
My Promised Land: The Triumph and Tragedy of Israel by Ari Shavit
From Time Immemorial: The Origins of the Arab-Jewish Conflict Over Palestine by Joan Peters
Ally: My Journey Across the American-Israeli Divide by Michael B. Oren
A Death in Jerusalem by Kati Marton
To Jerusalem and Back: A Personal Account by Saul Bellow
The Yellow Wind by David Grossman
Fewer