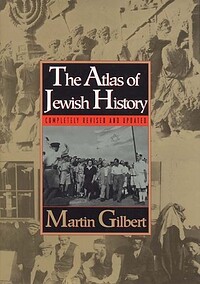 The Atlas of Jewish History

'An unusual and compelling insight into Jewish history... sheer detail and breadth of scale' BBC History Magazine This newly revised and updated edition of Martin Gilbert's Atlas of Jewish History spans over four thousand years of history in 154 maps, presenting a vivid picture of a fascinating people and the trials and tribulations which have haunted their story. The themes covered include: Prejudice and Violence- from the destruction of Jewish independence between 722 and 586 BC to the flight from German persecution in the 1930s. Also covers the incidence of anti-semitic attacks in the Americas and Europe. Migrations and Movements- from the entry into the promised land to Jewish migration in the twenty- first century, including new maps on recent emigration to Israel from Europe and worldwide. Society, Trade and Culture- from Jewish trade routes between 800 and 900 to the situation of world Jewry in the opening years of the twenty- first century. Politics, Government and War- from the Court Jews of the fifteenth century to the founding and growth of the modern State of Israel. This new edition is also updated to include maps showing Jewish museums in the United States and Canada, and Europe, as well as American conservation efforts abroad. Other topics covered in this revised edition include Jewish educational outreach projects in various parts of the world, and Jews living under Muslim rule. Forty years on from its first publication, this book is still an indispensible guide to Jewish history.… (more)

LibraryThing member melsmarsh
Well it's an atlas of Jewish history all right. Lots of maps showing things in Jewish history. One of the things I could rather interesting is the high amount of Jewish occupation around Genova. Given I have a medieval persona who I want to have a few Jewish traits (in order to disguise my own
Show More
following of the dietary laws) and he is from that area, I am wondering if a relative being a crypto-Jew is a real possibility.
Show Less

The Routledge Atlas of Jewish History by Martin Gilbert (Book)

Great Jews in Sports by Robert Slater
The Illustrated Atlas of Jewish Civilization by Josephine Bacon
My People: The Story of the Jews by Abba Solomon Eban
Atlas of the Holocaust by Martin Gilbert
On Women and Judaism: A View from Tradition by Blu Greenberg
24 more
Life Is With People: The Culture of the Shtetl by Mark Zborowski
The Illustrated History of the Jewish People by N. R. M. De Lange
The Jewish World: History and Culture of the Jewish People by Elie Kedourie
The Abandonment of the Jews: America and the Holocaust, 1941-1945 by David S. Wyman
The Third Jewish Catalog: Creating Community by Sharon Strassfeld
The Precious Legacy: Judaic Treasures from the Czechoslovak State Collection by David A. Altshuler
A History of the Jews: From the Babylonian Exile to the Present by Solomon Grayzel
The Golden Tradition: Jewish Life and Thought in Eastern Europe by Lucy S. Dawidowicz
From Generation to Generation: How to Trace Your Jewish Genealogy and Personal History by Arthur Kurzweil
Heritage: Civilization and the Jews by Abba Solomon Eban
The Second Jewish Catalog: Sources & Resources by Sharon Strassfeld
The Hanukkah Anthology by Philip Goodman
The Timechart History of Jewish Civilization by Trudy Gold
A Certain People: American Jews and Their Lives Today by Charles E. Silberman
A History of the Jewish People by Haim Hillel Ben-Sasson
Bar-Kokhba: The Rediscovery of the Legendary Hero of the Second Jewish Revolt Against Rome by Yigael Yadin
The Jews in Their Land by David Ben-Gurion
A History of the Jewish Experience Book 1, Torah and history : Book 2, Torah, mitzvot, and Jewish thought by Leo Trepp
Wanderings: Chaim Potok's History of the Jews by Chaim Potok
The Amazing Adventures of the Jewish People by Max I. Dimont
The Purim Anthology by Philip Goodman
Jewish Literacy: The Most Important Things to Know About the Jewish Religion, Its People, and Its History by Joseph Telushkin
How We Lived: A Documentary History of Immigrant Jews in American, 1880-1930 by Irving Howe
The Sacred Chain: A History of the Jews by Norman F. Cantor
Fewer