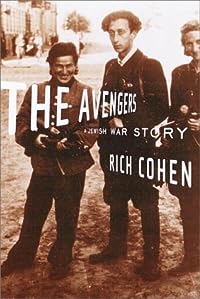 The Avengers: A Jewish War Story

'Gripping and even inspiring' Sunday Times When they were not yet twenty years old three young Jews left their families in Western Poland and came to the Lithuanian ghetto of Vilna. Abba, leader of the young people in the ghetto and Rushka and Vitka were his deputies. Together they organised the first underground movement in Europe, mapping the sewers and using the tunnels beneath the city to smuggle food and weapons into and out of the ghetto. In 1943 they escaped the ghetto and led their band of resistance fighters deep into the forests of Poland, where they lived for the remainder of the war. From here, they bombed the occupied city they loved. When the war was over Abba, Vitka and Rushka went to Israel, but they did not forget what they had learned in Vilna and in the forest.… (more)

LibraryThing member harrietbrown
Excellent book about a little talked-about subject: Jewish partisans fighting in Europe during WW II. Their bravery is astonishing. History disguised as an edge-of-your-seat thriller.
5 more
LibraryThing member carioca
This book was a fun read! Rich Cohen takes a "fighter" approach to it and relays the story of Abba Kovner, the leader of Jewish resistance in the Vilna ghetto. In this book, there is no room for self-pity, ruminations and "why" questions; Cohen writes in a quick pace and makes it all sound more
Show More
like a novel than a biography.
Show Less
LibraryThing member claudiachernov
Easy to read! I found the last few chapters especially fascinating. No footnotes or sources are supplied, though, and I wished for comparisons to other accounts of partisan life.
LibraryThing member rivkat
Cohen tells the story of three Jewish partisans who went from the Vilna ghetto to the forests, where they killed Nazis and sympathetic peasants, and then to Palestine/Israel. Also they were apparently a threesome, though this is never all that explicit. It’s a story of horrific losses, of
Show More
persistence and bitter determination, and survival when fighting back was brutally dangerous. Reading about the successive purges of the Vilna ghetto was very hard, especially given the collaboration of some Jews who thought that by showing the Nazis that Jews could be useful some would survive. It’s an amazing story, but not a nice one. (Things ebooks can’t do to you: my reading experience was marred by some helpful person who’d decided to correct the book whenever s/he disagreed with stylistic choices such as comma placement or casual use of “like” for “such as.” Would have been more tolerable if volunteer editor had known that “prised” is just as much a word as “pried” is, and equally appropriate, and that May 15, 1948 is a perfectly correct date to give for the invasion of Israel by the Arab armies. It got so that I was extremely sad when the correction of a German spelling was accurate. Wish I’d had an eraser as I went through.)
Show Less
LibraryThing member Jeeps
"It's our duty to fight for our people," she said. "It does not mean we've forgotten about Israel. We do it because we love Israel. Every people has its stories of heroism. It is these stories that give you the strength to go on. But these stories cannot remain only in the past, a part of our
Show More
ancient history. They must be a part of our real life as well. What will the coming generations learn from us? How good will they be if their entire history is one of slaughter and extermination? Our history must not contain only tragedy. We cannot allow that. It must also have heroic struggles, self-defense, war, even death with honor."

I used so many post-it tabs on this book. I used so many that I can run my hand over them like an instrument and make music. I tabbed the damn afterword more than once.

There's a pervasively singular narrative surrounding the Holocaust of Jews being led to their deaths by the Germans and of the Allies as their liberators. This is true — but as with most truth, it's more nuanced than that. Cohen writes in the afterword, "Yes. This is an important story; maybe the most important. It is what happened to the majority of Jews in the War. And yet: It is not the only story." The Avengers shifts the narrative onto the Jews who resisted. Since the back of the book isn't on Goodreads I'll quote it here, since I wouldn't be able to write a better synopsis:

This true story of World War II starts in the Lithuanian ghetto of Vilna, where a small band of underground Jews fight with unending cunning and courage. At the heart of this resistance are Abba Kovner, a fiery poet and leader, and two fearless teenage girls, Vitka Kempner and Ruzka Korczak. When the ghetto is liquidated, these three flee to the forest and fight alongside Russian and Polish partisan groups—dynamiting bridges, derailing trains, and destroying power plants and waterworks. Their actions eventually lead them down a winding path to Palestine, where a struggle for independence awaits the weary yet fiercely indomitable avengers. It is a side of the war not often seen—Jews fighting the Nazis on their own terms. It is also the story of three remarkable people able to call themselves comrades, lovers, friends.

Cohen was related to Ruzka, and much of this story was told to him firsthand since his childhood (the three of them, with their complicated personal history — though Cohen doesn't label it as such it's clear the three were involved in a poly relationship — remained close in relationship and proximity until their deaths), with clear due diligence when in pursuit of writing this book as an adult. As such his admiration for them is hard to miss, but he also doesn't shy away from telling and examining some of the complicated decisions they made. I'd go so far as to say this is a strength of the book: it's a fascinating and relevant look at the paths that war and persecution push people down. The fighters themselves didn't tell all of the history here until they reached old age and their stories — and their fight — were in danger of dying with them. It doesn't aim to be a comfortable narrative, just to reframe it, and it's incredibly effective at doing this. The author was born and raised in America, but the first time any American soldiers are mentioned in the book is not towards the end, and by then the story so thoroughly belongs in the hands of the fighting Jews at the center of the book that the soldiers' importance seems incidental. Their part exists outside of this narrative.

All three of them were remarkable, eloquent people, but Abba was the wordsmith. Cohen may not have been Abba's descendant, but he certainly inherited his talent for insight and poetry, which just makes this an incredibly smart, engaging, moving read. I'll leave you with one more quote to demonstrate this and then leave it at that, because hopefully if you have any interest in the history and relevance of World War II I've managed to impress upon you that this one is essential reading.

Some of the Jewish refugees . . . walked out to visit the camp. Abba never made the trip. Perhaps he did not have the strength to go, perhaps he did not need to. Though Abba had never seen Majdanek, he already understood it; he understood it the way Einstein understood the black hole—as a theory, as something the numbers suggested. His calculations, rhetoric and fears had long told him such a place must exist, that somewhere, on the edge of the universe, a hole must have opened, a void that swallowed up all energy, even light. The trains had to be going somewhere—right?

Show Less
LibraryThing member lydiasbooks
Interesting. Obviously this topic is really difficult to read about, but worth it. The details of life - ongoing survival through the strongest, most horrible pressures of our recent history are fascinating as well as scary and sad. Although none of my ancestors were members of this particular
Show More
group of partisans, my grandfather was in the French Resistance and some of my family members were killed by the Nazis. All my family of that generation were irrevocably scarred and had the course of their lives altered by the Second World War. I feel due to this that it is important for everyone to read such books and remember the atrocities committed in the past, to stop them happening again. This book is written in a fairly matter of fact style, which brings across the events. I'd definitely say that it needs to be read in small doses, but is great in the end. Recommended.
Show Less
Fewer

Defiance: The Bielski Partisans by Nechama Tec
They Fought Back: The Story of Jewish Resistance in Nazi Europe by Yuri Suhl
The Abandonment of the Jews: America and the Holocaust, 1941-1945 by David S. Wyman
The Vanishing American Jew: In Search of Jewish Identity for the Next Century by Alan M. Dershowitz
Atlas of the Holocaust by Martin Gilbert
11 more
Escape from the Holocaust by Kenneth Roseman
In My Brother's Image: Twin Brothers Separated by Faith After the Holocaust by Eugene Pogany
Escape from Sobibor by Richard L. Rashke
While Six Million Died: A Chronicle of American Apathy by Arthur D. Morse
A Vanished World by Roman Vishniac
Tough Jews: Fathers, Sons, and Gangster Dreams by Rich Cohen
The Survivor: An Inspiring True Story by Jack Eisner
Heritage: Civilization and the Jews by Abba Solomon Eban
A Hole in the Heart of the World: Being Jewish in Eastern Europe by Jonathan Kaufman
Hitler's War Against the Jews: A Young Reader's Version of The War Against the Jews, 1933-1945 by David A. Altshuler
Shtetl: The Life and Death of a Small Town and the World of Polish Jews by Eva Hoffman
Fewer