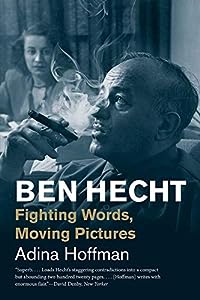 A vibrant portrait of one of the most accomplished and prolific American screenwriters, by an award-winning biographer and essayist He was, according to Pauline Kael, "the greatest American screenwriter." Jean-Luc Godard called him "a genius" who "invented 80 percent of what is used in Hollywood movies today." Besides tossing off dozens of now-classic scripts--including Scarface,Twentieth Century, and Notorious--Ben Hecht was known in his day as ace reporter, celebrated playwright, taboo-busting novelist, and the most quick-witted of provocateurs. During World War II, he also emerged as an outspoken crusader for the imperiled Jews of Europe, and later he became a fierce propagandist for pre-1948 Palestine's Jewish terrorist underground. Whatever the outrage he stirred, this self-declared "child of the century" came to embody much that defined America--especially Jewish America--in his time.   Hecht's fame has dimmed with the decades, but Adina Hoffman's vivid portrait brings this charismatic and contradictory figure back to life on the page. Hecht was a renaissance man of dazzling sorts, and Hoffman--critically acclaimed biographer, former film critic, and eloquent commentator on Middle Eastern culture and politics--is uniquely suited to capture him in all his modes.  … (more)

LibraryThing member HandelmanLibraryTINR
In this latest entry in the Yale “Jewish Lives” series, Hoffman beautifully illuminates the life and works of Ben Hecht, one of the most accomplished and prolific American screenwriters. Besides writing dozens of now-classic scripts he was also an ace reporter, celebrated playwright,
Show More
taboo-busting novelist, and a quick-witted provocateur. During WWII, he also emerged as an outspoken crusader for the imperiled Jews of Europe. He later became a fierce propagandist for pre-1948 Palestine’s Jewish terrorist underground. Adina Hoffman’s vivid portrait brings this charismatic and contradictory figure back to life. Hecht had a major influence on 20th century popular culture and Hoffman shows just how important he was in his day and why he matters now.
Show Less
1 more
LibraryThing member knahs
Found it difficult to read - think it was the writing style.
Fewer