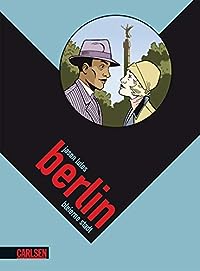 "The second volume of Jason Lutes's historical epic finds the people of Weimar Berlin searching for answers after the lethal May Day demonstration of 1929. Tension builds along with the dividing wall between communists and nationalists, Jews and gentiles, as the dawn of the Second World War draws closer. Meanwhile, the nightlife of Berlin heats up as many attempt to distract themselves from the political upheavals within the city. The American Jazz band Cocoa Kids arrives and quickly becomes a fixture. The lives of the characters within Lutes's epic weave together to create a seamless portrait of this transitory city. Marthe Muller follows lover Kurt Severing as he interviews participants in the May Day demonstration, but moonlights in the city's lesbian nightlife. Severing acts as a window through which the political shifts within the city and its participants can be seen. As with Berlin Book One: City of Stones, Lutes creates a sense of anxiety, of the doom to come" -- from publisher's web site.… (more)

LibraryThing member GrazianoRonca
‘And what a dirty, dirty city - the soot, the automobile fumes, the smoke from the factories.’
(p. 152)

The May Day demonstration of 1929 doesn’t solve the tensions between Communist and National Socialist, Jews and Gentiles. Jason Lutes in book two following various threads tells about people
Show More
living in Berlin: the main problem is which idea / party is better than another to solve the deep economic crisis.

Marthe Müller follows Kurt Severing while he interviews survivors of the May Day. People struggle to keep their goods, other people struggle to gain food.
An American jazz band holds concerts in Berlin, and this music helps people to avoid the Berlin’s smoky words.

Berlin a city without rules, moral, only words spread everywhere like smoke.
‘The world outside is filled with different sorts of words. Thanks to the emergency election, the rhetoric has come in thick, like smoke downwind of a burning building.’ (p. 206)
Show Less
5 more
LibraryThing member Jaie22
Library does not have vol. 3, which is a shame. Thoroughly enjoyed 1 & 2.
LibraryThing member AmyMacEvilly
The multi-threaded narrative takes place between the May Day massacre and the rise of the National Socialist party to control of the Reichstag in 1930. In addition to the characters from vol. 1, an American jazz band is added, and we see some of the cabaret and decadent culture that the period is
Show More
known for, as well as hearing political discussion and seeing political violence. Because it follows multiple people, whose narratives take divergent paths, do not read it expecting a traditional plot with climax and resolution. But there is plenty of tension.
Show Less
LibraryThing member dono421846
I felt the author was more in control of his story in this second volume that he was in the first. The feeling of too many characters no longer arises. Although, really... take some cocaine and become a lesbian? The volume ends at a climactic moment in German political history. We can only imagine
Show More
what awaits in the final volume of the trilogy.
Show Less
LibraryThing member DinadansFriend
Jason Lutes has created what I find a very interesting and mature graphic novel, set in Berlin from August 1928 to May of 1929. It contrasts the lives of relatively ordinary working Germans with those of the burgeoning Nazi movement. It is chillingly relevant to our current North American
Show More
situation. Read it before it's banned!
Show Less
LibraryThing member elenchus
The second of three books in series, each a collection of stories originally serialized as comics.

Berlin: Book Two (Issues 9-16) covers Jun 1929 - Sep 1930, the increasing frequency and severity of street violence after Blutmai leading to the dramatic electoral gains by the NSDAP in national
Show More
elections. To the players from Book One are added a jazz quintet from America, and the various business associates from Berlin's famed nightlife. Their race (all or most are evidently African Americans from the South), relative professional success, and general ignorance of German culture make for an interesting comment on American isolationism.

A favourite: notes from a jazz clarinet against the straight notes from the German radio, bending and swerving into a flight of birds, transitioning to the next scene.
Show Less
Fewer