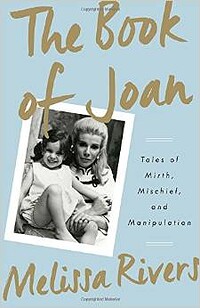 The Book of Joan: Tales of Mirth, Mischief and Manipulation

This New York Times bestseller is a hilarious and inspiring tribute to the iconic comedian Joan Rivers by the person who knew her best--her daughter, Melissa.   Joan and Melissa Rivers had one of the most celebrated mother-daughter relationships of all time.  If you think Joan said some outrageous things to her audiences as a comedian, you won't believe what she said and did in private. Her love for her daughter knew no bounds--or boundaries, apparently. ("Melissa, I acknowledge that you have boundaries. I just choose to not respect them.") In The Book of Joan: Tales of Mirth, Mischief and Manipulation, Melissa shares stories (like when she was nine months old and her parents delivered her to Johnny Carson as a birthday gift), bon mots ("Missy, is there anything better than seeing a really good looking couple pushing a baby that looks like a Sasquatch who got caught in a house fire?"), and life lessons from growing up in the Rosenberg-Rivers household ("I can do tips and discounts and figure out the number of gay men in an audience to make it a good show. That's all the math you'll ever need."). These were just the tip of the iceberg when it came to life in the family that Melissa describes as more Addams than Cleaver. And at the center of it all was a tiny blond force of nature.   In The Book of Joan, Melissa Rivers relates funny, poignant and irreverent observations, thoughts, and tales about the woman who raised her and is the reason she considers valium one of the four basic food groups.… (more)

LibraryThing member mcelhra
This book is a series of essays about Joan and Melissa. Overall, they are funny and poignant. But oh my lord. Melissa Rivers is not funny. Her supposedly funny metaphors and similes fall flat – flat as a pancake. (See what I did there?) The other thing that made me uncomfortable was Melissa
Show More
telling us which celebrities Joan personally didn’t like. It doesn’t seem classy and I don’t think Joan would have done that if she were alive. I mean sure she skewered people as part of her act but she never just came out and said, “I don’t like Ben Stiller because he doesn’t have good manners.”

Although I inwardly groaned at Melissa’s attempts at humor, I did enjoy learning what Joan Rivers was like a person, mother and grandma. I think Joan Rivers fans would enjoy this book.
Show Less
3 more
LibraryThing member PeggyK49
Maybe I'm just prejudiced, but I really liked this book. I love Joan Rivers and miss her and her comedy. I decided I would read all of the books Joan wrote, so I started searching local thrift stores for those. This book, written by Melissa, just never crossed my mind, however, my husband decided
Show More
this would make a good birthday present, and it did! Melissa tells lots of great stories about her mother. Some funny and some sad. I'm sure it was a hard thing for Melissa to write these essays. I, for one, appreciate that she did.
Show Less
LibraryThing member Karen59
I grew up in Ms River's neighborhood and she has been part of my childhood lore since I can remember. My mother adored her and since I idolized my mother, I did too. We both thought she was funny, sharp and incisive and completed related to her out-there Jewish sense of humor and style. When she
Show More
was fired from Fox we were upset and when her husband committed suicide we immediately called each other despondent and saddened. Joan Rivers was ours.

I began to change my perception of Joan Rivers as we both aged. To me, her humor seemed more mean-spirited, not particularly funny especially about women and though I kept my eye on her I mostly stopped watching her. When she died I was shocked and sad and eagerly grabbed this book to review.

On one hand it was wonderful to be reminded of the Joan that I knew when I was small and I enjoyed getting to know the more private Joan, especially as a mother. I appreciated knowing more about her daughter and as a tribute to her mother this book I am sure her Joan would kvell with joy. However, this book is so poorly written and Melissa's attempts to be funny in her own right fall flat. Joan was fresh (in all senses of the word) and funny and while Melissa could convey this when she let her mother speak for herself but when she tries to be funny in her own right it just does not work.

Thank you to Edelweiss for allowing me to review this book for an honest opinion
Show Less
LibraryThing member MHanover10
I like Joan Rivers. Sometimes she made me cringe with the stuff that she said, but most of the time she was pretty funny. I really enjoyed listening to this book by her daughter Melissa. It was neat to get a glimpse of Joan's private life and her relationship with Melissa and her grandson. There
Show More
were a few times I laughed out loud, which I'm sure my intern behind me at work wondered what was so funny. If you liked Joan even a little bit, pick up this audiobook and have a good laugh. At least it will put a smile on your face.
Show Less
Fewer

I Hate Everyone...Starting with Me by Joan Rivers
Diary of a Mad Diva by Joan Rivers
Still Foolin' 'Em: Where I've Been, Where I'm Going, and Where the Hell Are My Keys? by Billy Crystal
The Ragman's Son: An Autobiography by Kirk Douglas