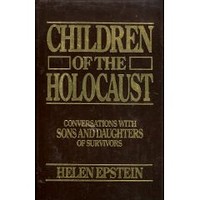 Children of the Holocaust: Conversations with Sons and Daughters of Survivors

"I set out to find a group of people who, like me, were possessed by a history they had never lived." The daughter of Holocaust survivors, Helen Epstein traveled from America to Europe to Israel, searching for one vital thin in common: their parent's persecution by the Nazis. She found:    * Gabriela Korda, who was raised by her parents as a German Protestant in South America;    * Albert Singerman, who fought in the jungles of Vietnam to prove that he, too, could survive a grueling ordeal;    * Deborah Schwartz, a Southern beauty queen who--at the Miss America pageant, played the same Chopin piece that was played over Polish radio during Hitler's invasion. Epstein interviewed hundreds of men and women coping with an extraordinary legacy. In each, she found shades of herself.… (more)

LibraryThing member seoulful
Very interesting stories of the children of Holocaust survivors. The author tries to find a common thread running through these children. Almost all of the children represented the only family for the survivors as all of the other relatives had been killed in the Holocaust. This created
Show More
difficulties and high expectations on the part of the parents for the children. Holocaust survivors tended to stay in tight groups with other survivors and marry other survivors because of the shared experience that could not be imagined by anyone else. Many refused to speak of their experiences, creating anxiety in the children. Good sociological study presented in a readable format.
Show Less

Out of the Whirlwind: A Reader of Holocaust LIterature a reader of holocaust literature by Albert H. Friedlander
Love Despite Hate: Child Survivors of the Holocaust and Their Adult Lives by Sarah Moskovitz
The Survivor: An Inspiring True Story by Jack Eisner
While Six Million Died: A Chronicle of American Apathy by Arthur D. Morse
The Abandonment of the Jews: America and the Holocaust, 1941-1945 by David S. Wyman
9 more
They Fought Back: The Story of Jewish Resistance in Nazi Europe by Yuri Suhl
A Jew Today by Elie Wiesel
Atlas of the Holocaust by Martin Gilbert
The Jews in Their Land by David Ben-Gurion
A Certain People: American Jews and Their Lives Today by Charles E. Silberman
Tell Them We Remember: The Story of the Holocaust by Susan D. Bachrach
Voyage of the Damned by Gordon Thomas
Echoes from the Holocaust: A Memoir by Mira Ryczke Kimmelman
The Holocaust Years: The Nazi Destruction of European Jewry, 1933-1945 by Nora Levin
Fewer