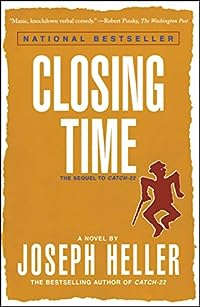 "In a novel as darkly comic and audaciously ambitious as was Catch-22, Joseph Heller has dared to write the sequel to his American classic, using many of Catch-22's characters, now older if not wiser, to deftly satirize the realities and the myths of America in the half century since they fought World War II." "In 1961, Joseph Heller's remarkable first novel made its way immediately into the American psyche and came to symbolize the absurdity of war and of life. Catch-22 was recognized overnight as a classic and has sold nearly ten million copies in the United States alone. It remains perhaps the funniest - and the most serious - novel ever written about war, "an apocalyptic masterpiece," in the words of one reviewer." "Now, thirty-three years later, Joseph Heller has written the sequel. You don't have to have read Catch-22 (But then, who on earth hasn't?) to enjoy Closing Time, which is a fully independent companion work, a comic masterpiece in its own right, in which Heller spears the inflated balloons of our national consciousness - the absurdity of our politics, the decline of society and our great cities, the greed and hypocrisy of our business and culture - with the same ferocious humor that he used against the conventional view of warfare. His characters are those of Catch-22, coming to the end of their lives and the century, as is the entire generation that fought in World War II: Yossarian, and Milo Minderbinder, the chaplain, and such newcomers as little Sammy Singer and giant Lew, all linked, this time in uneasy peace and old age, fighting, not the Germans this time, but The End." "Closing Time is outrageously funny and totally serious, and as brilliant and successful as Catch-22 itself, a fun-house mirror that captures, at once grotesquely and accurately, the truth about ourselves."--BOOK JACKET.Title Summary field provided by Blackwell North America, Inc. All Rights Reserved… (more)

LibraryThing member craigwbrown
I struggled to maintain interest as the context kept switching and the climax is tedious as it is thoroughly disconnected fro the characters struggles and experiences in the book.

There are two distinct stories threaded through the book. The absurdities experienced by the Catch 22 characters and the
Show More
more down to earth experiences of the other WW2 veterans Sam and Lew. Neither of the two stories are particularly bad, but intertwined as they are it falls apart. Either would have been okay as a stand alone story.

Frankly I recommend you to skip this one. There are better things to spend your time on.
Show Less
6 more
LibraryThing member aethercowboy
They say that every new beginning comes from some other beginning's end. Sorry, I couldn't resist that.

Everybody on the face of the planet has heard of Catch-22. But probably about 20% of the people who have read it know of its sequel, Closing Time. Well, now you know. You must "eliminate" one of
Show More
the other 20%.

But you can wait until you're done reading this...

Closing Time is set many years after Catch-22. We meet, once again, the characters that didn't die, like Yossarian, the Chaplain, and everybody's favorite Milo Minderbinder.

Also, we are given semi-autobiographical flashbacks of World War II, through personae recollecting on things that may or may not have actually happened to Heller (including a mention of Kurt Vonnegut saying something particularly witty).

The book is not Catch-22. In fact, no book could ever be the "next Catch-22." Not even this one. So don't bother reading it if you're going to be expecting Catch-23.

But, if you want to read a book that's full of Heller's quirky humor, but a little more tame than its predecessor, then, by all means, get this book and read it.

The plot is hard to describe, short of a lot of reflection on wartime, a biological anomaly that causes a long-suffering poor man to become a person of interest to the U.S. Government, a journey to Hell, and a video game-addicted vice president helping to cause global thermonuclear war.

This book couldn't be as enjoyed without first reading Catch-22. And if you've read Heller's other works and enjoyed them too, then this book is for you.
Show Less
LibraryThing member theboylatham
4/10.
Non-sensical and not funny.
LibraryThing member jpsnow
The sequel to Catch-22 shows the same cast of characters 40 years later. John Yossarian, Lew Rabinowitz, Milo Minderbender, Sam Singer, and the chaplain weave their way through an equally ridiculous plot, ultimately involving an accidental nuclear war during which the select few are taken to an
Show More
underground world composed of replicas of the founders favorite sites, including Coney Island and an ice cream plant. Preceding the retreat is the culmination of the wedding-to-end-all-weddings in the New York City bus station. The end is not nearly as interesting as the interaction and dialogue between the characters, who continue the style from their WWII days into their lives as government contractors, consultants, and small business owners and also recount all of the events that have passed. Most married well, had children -- just like their Dad -- and lost touch with each other until the time of this story in the 1990's. It's somewhat crude at times but definitely worth the read for anyone who previously enjoyed Catch-22.
Show Less
LibraryThing member .Monkey.
I was anxious to read this once I learned of its existence, and re-read Catch-22 to familiarize myself once again with those characters that I had formed such a bond with so many years ago.

However, I found myself a bit disappointed in reading this. I don't want to discourage anyone, as I did not
Show More
feel it was a "bad" book at all, and I did want to keep reading and find out what should happen... but it certainly did not entertain me and move me as Catch-22 did.

Here, we visit again with Yossarian, much later in his life. He has been married, had children, and in general just gone on living his kooky life. We also re-visit some of the folks he used to know, but most of the characters are new to us. Some of them likable, some of them not, all of them with their own quirks. Yossarian, of course, is still they key figure in the tale, but I found him a bit more lacking than before. In my eyes, he wasn't nearly as easy to fall "in love" with as he was in Catch-22, not nearly so wild and crazy. The plot and storyline still were, but it just didn't have the same feeling or appeal as the one that came before.

However, while it's not something I think I would pick up again, I am glad to have read it, and learned what happened with more of his life, and some of those I came to love so preciously.

Yossarian lives! ;)
Show Less
LibraryThing member TobinElliott
Had to give up on this one. Made it to about page 120 and, in the middle of the sentence, just gave up. I simply didn't care, had no idea what was going on, or what this book was about. I'd even tried switching to the audiobook along the way, hoping that would help. It did not.

There's sections
Show More
where all I read was a summary of a character's life, including one that went on and on about banging every girl he ever wanted, and the character came off like that *ssh*l* you likely knew in tenth grade who bragged about all the chicks he'd done.

In Catch-22, everything that shouldn't have worked, worked. In this one, nothing worked. The characters are boring, the dialogue is decidedly unfunny, the pointed jabs are dull and miss the mark, and overall, there is no plot to speak of.

I really wanted to like this one, because I loved Catch-22 so much. This is like a déjà vu of Fight Club, having adored the first one and loathed the follow-up.

The only good thing about this novel is that it got me to re-read the first one again and enjoy it all over again.
Show Less
LibraryThing member kemp
Doesn't come close to the original.
Fewer