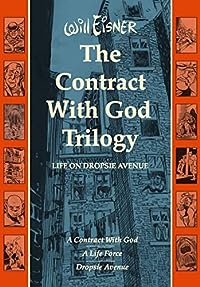 The Contract with God Trilogy: Life on Dropsie Avenue

A Contract with God, originally published in 1978, was the first graphic novel: the prototype?along with Life Force and Dropsie Avenue?or such seminal works as Maus and Persepolis. Set during the Great Depression, this literary trilogy, assembled in one volume for the first time, presents a treasure house of now near-mythic stories that fictionally illustrate the bittersweet tenement life of Eisner's youth. With nearly two dozen new illustrations and a revealing new foreword, this book ultimately tells the epic story of life, death, and resurrection while exploring man's fractious relationship with an all-too-vengeful God. This mesmerizing, fictional chronicle of the universal American immigrant experience is Eisner's most poignant and enduring legacy.… (more)

LibraryThing member AgneJakubauskaite
WHAT IS IT ABOUT?

Will Eisner’s “The Contract With God Trilogy: Life on Dropsie Avenue” is a collection of three stand-alone graphic novels set on Dropsie Avenue, a fictional street in the Depression-era Bronx, one of the five boroughs of New York City. The first book in this trilogy, “A
Show More
Contract With God,” consists of four audacious and cynical stories of Dropsie Avenue’s residents. In addition to being extremely entertaining, these stories probe such timeless issues as injustice and morality. In the second book, “A Life Force,” numerous stories of Dropsie Avenue’s residents intertwine with each other, drawing a vibrant and realistic picture of an urban life in America during the Great Depression as well as attempting to shine the light on the meaning of life. “Dropsie Avenue,” the final book in the trilogy, is a century-long biography of Dropsie Avenue itself, in which the birth, growth, decay and resurrection of the street is told through everyday lives of its inhabitants as well as the ethnic and social changes of the community throughout the decades.

1) Timeless specimen.
Written in 1978, the first book in the trilogy, “A Contract with God,” marks the birth of a modern graphic novel, and the whole trilogy sets high standards for the genre. In addition to being so historically important and well-crafted, Eisner’s book is also timeless as it deals with eternal issues and truly seems like it could have been published yesterday.

2) Realistic.
Although the stories and characters in “The Contact With God Trilogy” are fictional, the book is extremely realistic. On Dropsie Avenue, bad things happen to good people for no reason, bad guys prevail, and the boundaries between right and wrong are blurred. Yes, it might seem bleak, hopeless and unnecessarily violent at times, but so is life, especially during the Great Depression. What is more, the life cycle of the street in “Dropsie Avenue” is so well-thought-out and masterfully written that it seems more of a first-hand experience than a made-up story.

3) Thought-provoking.
Even though most of the time Eisner’s tone is humorous and seemingly lighthearted, most of the stories carry a deeper message. Both directly and indirectly, the author often makes the reader pause and ponder upon the meaning of existence, reexamine shared values or reevaluate social norms.

4) Gorgeous artwork.
I simply adored the illustrations. They are not terrible detailed, especially when it comes to faces, as many of the characters look alike, while the same person often looks quite different in different panels, but I just love Eisner’s style: so lively, so expressive and so… stylish! I wish I could draw like that. By the way, the illustrations are colorless, just pencil and ink, but I think such artwork fits the gloomy mood of the Depression-era perfectly.

1) Wordy.
At times, especially in “A Life Force,” there is a little bit too much text for a graphic novel. On the other hand, the background stories or the newspaper clips really help to set the mood and understand the events better.

2) Long and effortful.
I loved the first book, but later my enthusiasm dwindled. However, it might be due to the fact that I read the book in a relatively short time. Although it is a graphic novel, I wouldn’t call it a light read as it makes you think A LOT, and it seems that the more I think about the stories and revisit certain pages, the more I understand and appreciate the gravity of this book.

If you are a fan of graphic novels, Will Eisner’s “The Contract With God Trilogy: Life on Dropsie Avenue” is a must-read as it has a historical importance in the world of graphic storytelling and is a fine example of what the genre has to offer. If possible though, don’t rush reading this trilogy and take time to think about what you’ve read as this might help to understand and appreciate the book more.
Show Less
6 more
LibraryThing member wyvernfriend
Without the illustration this would have been nothing really, with the illustration you see these sequence of graphic novels come to life with people and neighbourhoods and history all interwoven and intermingled.
The first book is Contract with God which compromises four stories, Contract with
Show More
God, The Street Singer, The Super and Cookalein, these were written as a sequence and form an interwoven story of the time they're set in.

The second book, A Life Force is the story of one man's life path from the depression to a new fortune. Interesting and touching.

The last book is Dropsie Avenue, a biography of a neighbourhood, where he points at the contradictions people are and how they forget so quickly how they were once the new settlers, over and over again.

I found this interesting and touching and hope to be as eloquent in my 90s.
Show Less
LibraryThing member jferr29
Power illustrated novel about life in the Bronx. "Dropsie Avenue", the last volume in the trilogy, was especially powerful as a history of a Bronx neighborhood that could have been written about the old neighborhood.
LibraryThing member alexnisnevich
In general, I admit that I'm rather prejudiced toward graphic novels. I've been recommended Watchmen and similar works, but to me they seemed not different enough from regular ol' comics to merit the "novel" category. I never really felt that a graphic novel could really capture the sort of spark
Show More
of light that you see in good books. And then I read The Contract With God trilogy.

What WIll Eisner does with these books is truly amazing. He creates an entire neighborhood, full of color and stories and wit, all contained within a single street (and for the most part, within a single building). Rather than hampering the story in any way, the art complements it completely, with the simply drawn yet expressive characters and backgrounds clearly showing what would otherwise take pages and pages on description. Some of the pages were so beautifully drawn that I had to stop reading and just stare at the art for some time. The writing is at turns naturalistic (at times overly reliant on dialect, I felt) and poetic, sort of mimicking Steinbeck.

The first book, The Contract with God, is a collection of four short stories set in a single building in the early 20th century Bronx, about a devout man angry with God, a street singer, a building super, and a Jewish resort town. I actually felt that the stories here were rather hit-or-miss, and I liked "The Street Singer" and "Cookalein" best. The second book, The Life Force, returns to the same building in the Depression, this time telling a long and winding narrative involving Communists, Holocaust refugees, interfaith relationships, an "enchanted prince", a Sicilian crime gang, and, of course, cockroaches. The plot sometimes feels that it simply has too much going on, but I was gripped from almost the first page.

The third book, Dropsie Avenue, is something different entirely, and sets itself apart from the other two books. It chronicles the entire history of this fictional neighborhood, as it passed from Dutch colonists to the English and Irish upper classes, then to in turns Italian, Jewish, Hispanic, and black tenement dwellers, and what happened afterward, covering several centuries in all but focusing primarily on the 20th century. It's a history of a neighborhood, but it's more than just that, because, as one character writes, "Buildings are only buildings, but people make a neighborhood." In this book, unlike the others, the reader truly gets to see characters grow: a core group of characters is seen from childhood to old age, and characters change as the neighborhood around them changes well. The book is very nostalgic, but also warns against overly attaching oneself to a single image of the past, because change is always present, in every neighborhood, "visible evidence of implacable growth."

P.S. I just read that Will Eisner wrote and drew Dropsie Avenue at age 78. This man is unbelievable.
Show Less
LibraryThing member swampygirl
Although I like this collection better then the other work by him that I've read, something always seems to inherently rub me the wrong way about Eisner.
I do like his aesthetic style though, and appreciate how the piece was a breath of fresh air when it comes to the narcissistic nature of
Show More
semi-autobiographical graphic novels - this collection had a slightly more mature edge to it over all.
Show Less
LibraryThing member macha
three graphic novels about a neighbourhood in the Bronx, over time.
LibraryThing member PhoenixTerran
The Contract with God Trilogy brings together three of Eisner's works: A Contract with God and Other Tenement Stories (considered to be the first graphic novel), A Life Force, and Dropsie Avenue.

A Contract with God and Other Tenement Stories consists of four vignettes taking place in the 1930s in a
Show More
Bronx tenement: Cookalein, The Super, The Street Singer, and A Contract With God. This tenement is also the setting for A Life Force and is the main component of Dropsie Avenue which follows the births, deaths, and rebirths of the neighborhood itself.

The stories are semi-autobiographical and charged with emotion. Eisner is a masterful story-teller and uses the graphic novel medium extraordinarily well, especially when considering that this literary style was only beginning to be established when he was writing. He brought his talent and artistic skill to this new medium, paving the way for others to follow. The Contract with God Trilogy provides a marvelous example of his important and ground-breaking work.