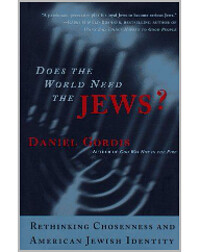 Does the World Need the Jews? Rethinking Chosenness and American Jewish Identity

"What would happen if the world woke up one day and there were simply no Jews left? Would the world be worse off? In Does the World Need the Jews?, Rabbi Daniel Gordis suggests that on the eve of the twenty-first century, one of the chief sources of malaise among contemporary Jews is that many cannot answer this critical question. Though many Jewish community leaders now speak of an American Jewish "continuity crisis," Gordis sees a very different problem. The issue, he argues, is not continuity, but identity. American Jews simply have no conception of why they matter or what their tradition stands for." "In this sure-to-be-controversial book, Gordis argues that by assimilating so thoroughly into American culture, Jews have lost their distinctive voice. He contends that important elements of American culture - among them the political left as well as the right, multiculturalism, new forms of anti-Semitism - undermine American Jewish identity. Gordis suggests that American Jews must be willing to stand out rather than blend in, and he urges a return to the substance and richness of Jewish tradition." "Rather than simply point to the problem, Does the World Need the Jews? offers solutions. Gordis's vision of an American Jewish future filled with meaning and significance takes us through discussions of abortion and capital punishment, a critique of the "Judeo-Christian" tradition, the problem of Jewish identity on university campuses and a defense of Jewish life in the Diaspora, among many others. What emerges is a dramatic and compelling agenda for American Jews who want to believe that Judaism still has a reason to survive."--BOOK JACKET.Title Summary field provided by Blackwell North America, Inc. All Rights Reserved… (more)

Jew vs. Jew: The Struggle for the Soul of American Jewry by Samuel G. Freedman
The Service of the Heart: A Guide to the Jewish Prayer Book by Evelyn Garfiel
God Was Not in the Fire: The Search for a Spiritual Judaism by Daniel Gordis
A Certain People: American Jews and Their Lives Today by Charles E. Silberman
The Healer of Shattered Hearts: A Jewish View of God by David J. Wolpe
20 more
The American Jews: Portrait of a Split-Personality by James Yaffe
Where Are We? The Inner Life of America's Jews by Leonard J. Fein
Sacred Fragments: Recovering Theology for the Modern Jew by Neil Gillman
Judaism as a Civilization: Toward a Reconstruction of American Jewish Life by Mordecai Menahem Kaplan
Gates of Mitzvah: A Guide to the Jewish Life Cycle by Simeon J. Maslin
Finding God: Ten Jewish Responses ten Jewish responses by Rifat Sonsino
The Vanishing American Jew: In Search of Jewish Identity for the Next Century by Alan M. Dershowitz
The Jews in America: Four Centuries of an Uneasy Encounter by Arthur Hertzberg
The Jews in America: The Roots, History, and Destiny of American Jews by Max I. Dimont
The Jewish Family Book by Sharon Strassfeld
How to Get More Out of Being Jewish even if you are not sure you believe in God, you think going to synagogue is a waste of time, you think keeping kosher is stupid, you hated Hebrew school, or all of the above by Gil Mann
Chutzpah by Alan M. Dershowitz
American Judaism by Nathan Glazer
A Torah is Written by Paul Cowan
Jewish Renewal: A Path to Healing and Transformation by Michael Lerner
What Does Being Jewish Mean? read-aloud responses to questions Jewish children ask about history, culture, and religion by E. B. Freedman
To Raise a Jewish Child: A Guide for Parents by Hayim Donin
Great Jewish Thinkers of the Twentieth Century Edited with introductory essays by Simon Noveck
A Jew Today by Elie Wiesel
Taking Judaism Personally: Creating a Meaningful Spiritual Life by Judy Petsonk
Fewer