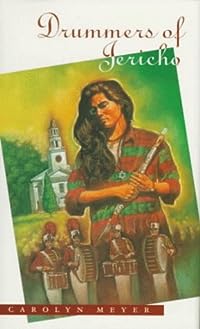 Pazit Trujillo begins her freshman year at Jericho High School and quickly realizes that people in this small suburban town aren't used to Jewish girls with strange names. Despite the whispers and stares, Pazit wants to fit in and is determined to join the school's marching band. But when she learns they will be playing hymns and marching in the formation of a cross, she objects. Only one person in the town, drummer Billy Harper, stands up for her, and in the end both Billy andPazit learn something about friendship and the importance of exercising one's rights.

LibraryThing member STBA
A fourteen-year-old Jewish girl goes to live with her father and stepmother in a small town and soon finds herself the center of a civil rights battle when she objects to the high school band marching in the formation of a cross.

The Singing Mountain by Sonia Levitin
Bubby, Me, and Memories by Barbara Pomerantz
The Treasure in the Tiny Blue Tin by Dede Fox Ducharme
Pink Slippers, Bat Mitzvah Blues by Ferida Wolff
Tell Me a Mitzvah: Little and Big Ways to Repair the World by Danny Siegel
23 more
The Old Synagogue by Richard Rosenblum
The Cardinal's Snuffbox by Kenneth Roseman
Until the Messiah Comes: A Russian-Jewish Adventure by Kenneth Roseman
Too Young for Yiddish by Richard Michelson
The Swastika on the Synagogue Door by J. Leonard Romm
Cheesecake for Shavuot by Allison Ofanansky
My Name is Rachamim by Jonathan P. Kendall
With All My Heart, With All My Mind: Thirteen Stories About Growing Up Jewish by Sandy Asher
Matzah Ball: A Passover Story by Mindy Avra Portnoy
David and Max by Gary Provost
Happy New Year, Beni by Jane Breskin Zalben
A Candle for Grandpa: A Guide to the Jewish Funeral for Children and Parents by David Techner
Of Heroes, Hooks, and Heirlooms by Faye Silton
Sammy Spider's First Sukkot by Sylvia A. Rouss
Living a Jewish Life: Jewish Traditions, Customs, and Values for Today's Families by Anita Diamant
The Mysterious Guests: A Sukkot Story by Eric A. Kimmel
A is for Abraham: A Jewish Family Alphabet by Richard Michelson
The Cross by Day, the Mezuzzah by Night by Deborah Spector Siegel
Bar Mitzvah Lessons by Martin Elsant
The Christmas Menorah: How a Town Fought Hate by Janice Cohn
Speed of Light by Sybil Rosen
The Nine Questions People Ask about Judaism by Dennis Prager
The Mysterious Visitor: Stories of the Prophet Elijah by Nina Jaffe
Fewer