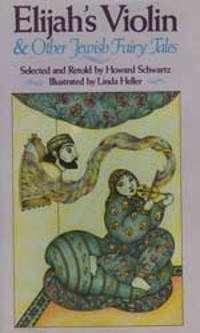 Tales of magic and wonder can be found in every phase of Jewish literature, from the sacred to the secular. The fairy tale in particular--set in enchanted lands and populated with a variety of human and supernatural beings, both good and evil--holds a very special place in the Jewishtradition. For in the fairy tale, where good and evil engage in a timeless struggle, we have a clear reflection of the Jewish world view, where faith in God can defeat the evil impulse.In Elijah's Violin, Howard Schwartz offers a sumptuous collection of thirty-six Jewish fairy tales from virtually every corner of the world. At once otherworldy and earthy, pious and playful, these celebrated tales from Morocco and India, Spain and Eastern Europe, Babylon and Egypt, illustratenot only their Jewish character but also their universality of themes. Invoking the biblical tale of David and Goliath, we read as King David defeats the giant by hovering above its spear in King David and the Giant. In the romantic tale of The Princess in the Tower, a variant of Rapunzel, we watchas the cautious King Solomon recognizes the vanity in trying to prevent Providence from taking place. And we see the religious nature of the quest for Elijah's violin in the title story. The successful completion of the king's quest enables the violin's imprisoned melodies, emblematic of the Jewishspirit, to be set free.Throughout this richly illustrated collection, one can find the quests and riddles of the traditional fairy tale along with the divine intervention that characterizes the Jewish fairy tale. Skillfully translated, these stories will captivate children and adults alike in which romance and magicbecome enchantingly entwined with faith, duty, and wisdom.… (more)

A Certain People: American Jews and Their Lives Today by Charles E. Silberman
The Service of the Heart: A Guide to the Jewish Prayer Book by Evelyn Garfiel
The New Jewish Baby Book: Names, Ceremonies & Customs -- A Guide for Today's Families by Anita Diamant
Lilith's Cave: Jewish Tales of the Supernatural by Howard Schwartz
Deborah, Golda, and Me: Being Female and Jewish in America by Letty Cottin Pogrebin
26 more
Because God Loves Stories: An Anthology of Jewish Storytelling by Steven J. Zeitlin
Jewish Folktales by Pinhas Sadeh
Gates of Mitzvah: A Guide to the Jewish Life Cycle by Simeon J. Maslin
Yiddish Folktales by Beatrice Weinreich
To Raise a Jewish Child: A Guide for Parents by Hayim Donin
Jewish Renewal: A Path to Healing and Transformation by Michael Lerner
Great Jews in Sports by Robert Slater
Matzah Ball: A Passover Story by Mindy Avra Portnoy
The Wonder Child & Other Jewish Fairy Tales by Howard Schwartz
Judaism as a Civilization: Toward a Reconstruction of American Jewish Life by Mordecai Menahem Kaplan
A Portion in Paradise, and Other Jewish Folktales by H. M. Nahmad
The Third Jewish Catalog: Creating Community by Sharon Strassfeld
A Treasury of Jewish Humor: A Classic Collection of Humorous Stories, Satires and Witticism from the Rich Jewish Literature of All Times by Nathan Ausubel
How to Get More Out of Being Jewish even if you are not sure you believe in God, you think going to synagogue is a waste of time, you think keeping kosher is stupid, you hated Hebrew school, or all of the above by Gil Mann
Sabbath: The Day of Delight by Abraham Ezra Millgram
The New Jewish Wedding by Anita Diamant
The Jewish Way in Death and Mourning by Maurice Lamm
Mimekor Yisrael: Classical Jewish Folktales by Micah Joseph Berdichevsky
Jewish and Female: Choices and Changes in Our Lives Today by Susan Weidman Schneider
The Sukkot/Simhat Torah Anthology by Philip Goodman
The Book of Miracles: A Young Person's Guide to Jewish Spiritual Awareness by Lawrence Kushner
The Second Jewish Catalog: Sources & Resources by Sharon Strassfeld
Jewish Family & Life traditions, holidays, and values for today's parents and children by Yosef I. Abramowitz
Messengers of God: Biblical Portraits and Legends by Elie Wiesel
The Jews in America by David Cohen
The Purim Anthology by Philip Goodman
Fewer