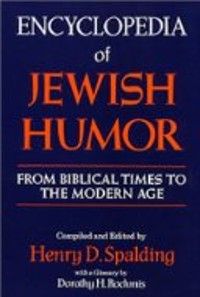 Encyclopedia of Jewish Humor: From Biblical Times to the Modern Age

In this comprehensive encyclopedia, Spalding has not only collected the most hilarious anecdotes and stories that have ever been told, but he places them in proper historical perspective. In 39 chapters he marches the colourful characters of Jewish folklore through 40 centuries, from biblical times to the atomic age, in a manner that illuminates the highlights of Jewish history and portrays the vicissitudes of Jewish life in most of the countries where Jews have lived. Spalding allows 40 centuries of Jewry to speak for itself, not through tears, but laughter; sometimes with a sigh, but mostly in jubilant fashion.

LibraryThing member djryle
A favourite! Comprehensive compendium of humour that taps into the Hebrew heart and spans the millenia from Abraham onwards. Does not skip the darkest times.

The Big Book of Jewish Humor by William Novak
A Treasury of Jewish Folklore stories, traditions, legends, humor, wisdom, and folk songs of the Jewish people by Nathan Ausubel
A Treasury of Jewish Humor: A Classic Collection of Humorous Stories, Satires and Witticism from the Rich Jewish Literature of All Times by Nathan Ausubel
Leo Rosten's Treasury of Jewish Quotations by Leo Calvin Rosten
The Modern Jewish Girl's Guide to Guilt by Ruth Andrew Ellenson
24 more
The Rosh Hashanah Anthology by Philip Goodman
Jewish Humor: What the Best Jewish Jokes Say About the Jews by Joseph Telushkin
The Big Jewish Book for Jews everything you need to know to be a really Jewish Jew by Ellis Weiner
The Sukkot/Simhat Torah Anthology by Philip Goodman
Great Jews in Sports by Robert Slater
Judaikitsch: Tchotchkes, Schmattes, and Nosherei by Jennifer Traig
A Treasure-Trove of American Jewish Humor by Henry D. Spalding
The Purim Anthology by Philip Goodman
The Third Jewish Catalog: Creating Community by Sharon Strassfeld
A Certain People: American Jews and Their Lives Today by Charles E. Silberman
Sabbath: The Day of Delight by Abraham Ezra Millgram
Great Jewish Women by Elinor Slater
How to Get More Out of Being Jewish even if you are not sure you believe in God, you think going to synagogue is a waste of time, you think keeping kosher is stupid, you hated Hebrew school, or all of the above by Gil Mann
The Precious Legacy: Judaic Treasures from the Czechoslovak State Collection by David A. Altshuler
The Second Jewish Catalog: Sources & Resources by Sharon Strassfeld
Living a Jewish Life: Jewish Traditions, Customs, and Values for Today's Families by Anita Diamant
The River of Light: Spirituality, Judaism, and the Evolution of Consciousness by Lawrence Kushner
The New Joys of Yiddish by Leo Calvin Rosten
Jewish and Female: Choices and Changes in Our Lives Today by Susan Weidman Schneider
Life Is With People: The Culture of the Shtetl by Mark Zborowski
Deborah, Golda, and Me: Being Female and Jewish in America by Letty Cottin Pogrebin
Putting God on the Guest List: How to Reclaim the Spiritual Meaning of Your Child's Bar or Bat Mitzvah by Jeffrey K. Salkin
The Yom Kippur Anthology by Philip Goodman
The Service of the Heart: A Guide to the Jewish Prayer Book by Evelyn Garfiel
Fewer