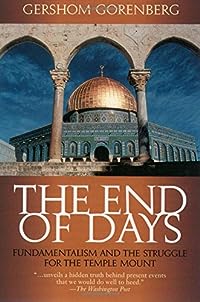 Cain murdered Abel, says an ancient legend, in an argument over who would own the Temple Mount. That story summs up the passion aroused by the sacred real estate: the hilltop in Jerusalem where King David erected an alter, where Solomon and Herod built their temples, where the Dome of the Rock now stands, and where prominent leaders of America's Christian right insistently predict, the Third Temple will be built. The Temple Mount is a symbol, in the world of Christianity, Judaism and Islam, of the end of the world, and its fate is important to the preservation of peace in the volatile Middle East. This book explains the fascination, of fundamentalist, with the Mount and why it remains a catalyst for conflict. It also shows why the risks will increase after the year 2000, as prophesised dates for the End pass and believers look for a way to ensure that the End comes within the lifetime of those who saw the creation of the state of Israel.… (more)

From Time Immemorial: The Origins of the Arab-Jewish Conflict Over Palestine by Joan Peters
Standing with Israel by David Brog
Myths and Facts: A Guide to the Arab-Israeli Conflict by Mitchell G. Bard
Arab and Jew: Wounded Spirits in a Promised Land by David K. Shipler
The Israelis: Founders and Sons by Amos Elon
14 more
Jerusalem: City of Mirrors by Amos Elon
Personal Witness: Israel Through My Eyes by Abba Solomon Eban
Jew vs. Jew: The Struggle for the Soul of American Jewry by Samuel G. Freedman
Who Is a Jew? Conversations, Not Conclusions by Meryl Hyman
The Seventh Million: The Israelis and the Holocaust by Tom Segev
O Jerusalem! by Larry Collins
In the land of Israel by Amos Oz
One People, Two Worlds: An Orthodox Rabbi and a Reform Rabbi Explore the Issues that Divide Them by Ammiel Hirsch
Soldier of peace: The Life of Yitzhak Rabin by Dan Kurzman
The Sukkot/Simhat Torah Anthology by Philip Goodman
The River of Light: Spirituality, Judaism, and the Evolution of Consciousness by Lawrence Kushner
Chutzpah by Alan M. Dershowitz
The Service of the Heart: A Guide to the Jewish Prayer Book by Evelyn Garfiel
The Missing Peace: The Inside Story of the Fight for Middle East Peace by Dennis Ross
Fewer