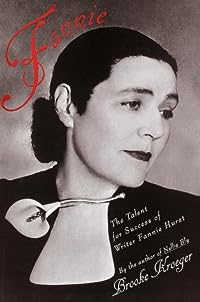 Fannie: The Talent for Success of Writer Fannie Hurst

In the first half of the twentieth century, Fannie Hurst was known as much for the startling particulars of her extraordinary life as for writing stories that penetrated the human heart. Hers is the story of a Jewish girl from the Middle West turned dynamic celebrity author, the kid down the street who spoke her dreams out loud and then managed to fulfill every one of them. Her name was constant newspaper fodder. It appeared in reviews of her twenty-six books; in reports of her travels, her lifestyle (including the marriage she curiously chose to hide from her friends as well as the public), her diet, and her provocative public statements; and in her obituary, which was front-page news, even in The New York Times. With stories and novels such as "Humoresque," Back Street, and Imitation of Life, Fannie Hurst reigned as the leading "sob sister" of American fiction in the 1920s and 1930s. Her name on the cover of a magazine was enough to sell out an issue. She wrote of immigrants and shopgirls, love, drama, and trauma, and in no time the title "World's Highest-Paid Short-Story Writer" attached itself to her name. Hollywood fattened her bank account, making her works into films thirty-one times in forty years. Fannie Hurst lent her prominence and pen to the day's significant socialist, liberal, humanitarian, and feminist causes. She became a forceful supporter for the rights of African Americans, and was an early friend and literary advocate of Zora Neale Hurston and Dorothy West. As a pioneering crusader for women's advancement--she mounted the soapbox years before it was fashionable--she promoted economic self-sufficiency, equal opportunity, and Eleanor Roosevelt, whose frequent guest she was at the White House. Her life seems to have intersected with everyone of significance in her era, in science, the arts, the media, Hollywood, academia, and politics. In examining the life of this great, celebrated, and yet now nearly forgotten woman, Brooke Kroeger also explores the curious backslide in the progress of women in general from the Depression to the mid-1960s. This is a carefully drawn, extensively researched, and entertaining portrait of one of the most successful, glamorous, and forward-thinking women of the twentieth century.… (more)

My Name is Asher Lev by Chaim Potok