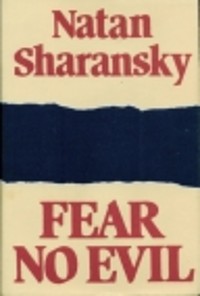 Temperamentally and intellectually, Natan Sharansky is a man very much like many of us--which makes this account of his arrest on political grounds, his trial, and ten years' imprisonment in the Orwellian universe of the Soviet gulag particularly vivid and resonant. Since Fear No Evil was originally published in 1988, the Soviet government that imprisoned Sharansky has collapsed. Sharansky has become an important national leader in Israel--and serves as Israel's diplomatic liaison to the former Soviet Union! New York Times Jerusalem Bureau Chief Serge Schmemann reflects on those monumental events, and on Sharansky's extraordinary life in the decades since his arrest, in a new introduction to this edition. But the truths Sharansky learned in his jail cell and sets forth in this book have timeless importance so long as rulers anywhere on earth still supress their own peoples. For anyone with an interest in human rights--and anyone with an appreciation for the resilience of the human spirit--he illuminates the weapons with which the powerless can humble the powerful: physical courage, an untiring sense of humor, a bountiful imagination, and the conviction that "Nothing they do can humiliate me. I alone can humiliate myself."… (more)

A Certain People: American Jews and Their Lives Today by Charles E. Silberman
Chutzpah by Alan M. Dershowitz
Great Jewish Women by Elinor Slater
The Jews of Silence: A Personal Report on Soviet Jewry by Eliezer Wiesel
Sabbath: The Day of Delight by Abraham Ezra Millgram
13 more
Abba Eban: An Autobiography by Abba Solomon Eban
Great Jewish Thinkers of the Twentieth Century Edited with introductory essays by Simon Noveck
Deborah, Golda, and Me: Being Female and Jewish in America by Letty Cottin Pogrebin
Profiles in American Judaism: The Reform, Conservative, Orthodox, and Reconstructionist Traditions in Historical Perspective by Marc Lee Raphael
A Treasury of Jewish Humor: A Classic Collection of Humorous Stories, Satires and Witticism from the Rich Jewish Literature of All Times by Nathan Ausubel
Anatoly and Avital Shcharansky: The Journey Home by Jerusalem Post,
Jewish and Female: Choices and Changes in Our Lives Today by Susan Weidman Schneider
Mixed Blessings marriage between Jews and Christians by Paul Cowan
The Jews in America: The Roots, History, and Destiny of American Jews by Max I. Dimont
How to Get More Out of Being Jewish even if you are not sure you believe in God, you think going to synagogue is a waste of time, you think keeping kosher is stupid, you hated Hebrew school, or all of the above by Gil Mann
Jew vs. Jew: The Struggle for the Soul of American Jewry by Samuel G. Freedman
The Service of the Heart: A Guide to the Jewish Prayer Book by Evelyn Garfiel
The Jews in America by David Cohen
Fewer