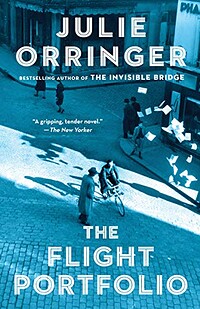 "The long-awaited new work from the best-selling author of The Invisible Bridge takes us back to occupied Europe in this gripping historical novel based on the true story of Varian Fry's extraordinary attempt to save the work, and the lives, of Jewish artists fleeing the Holocaust In 1940, Varian Fry--a Harvard educated American journalist--traveled to Marseille carrying three thousand dollars and a list of imperiled artists and writers he hoped to rescue within a few weeks. Instead, he ended up staying in France for thirteen months, working under the veil of a legitimate relief organization to procure false documents, amass emergency funds, and set up an underground railroad that led over the Pyrenees, into Spain, and finally to Lisbon, where the refugees embarked for safer ports. Among his many clients were Hannah Arendt, Franz Werfel, Andre Breton, Max Ernst, Marcel Duchamp, and Marc Chagall. The Flight Portfolio opens at the Chagalls' ancient stone house in Gordes, France, as the novel's hero desperately tries to persuade them of the barbarism and tragedy descending on Europe. Masterfully crafted, exquisitely written, impossible to put down, this is historical fiction of the very first order, and resounding confirmation of Orringer's gifts as a novelist"--… (more)

LibraryThing member Chatterbox
There appears to be a flood of new novels about World War II in the offing, many focusing on those who resisted Nazi ideology or military occupation, in one way or another. Julie Orringer's new novel is likely to stand out from the crowd precisely because it doesn't over-emphasize derring-do --
Show More
Varian Fry, in her telling, is a reluctant hero as he tries to save Marc Chagall and others from an evil that he and others are only beginning to understand will become known as the Holocaust. Instead, Orringer emphasizes character development: the stress that living in a quasi-occupied world (Vichy France) places on Fry and his motley group of helpers and on those desperately trying to find a way out of Europe before it's too late.

Orringer blends fact with fiction here, and deals with questions such as which lives are most worth saving -- and how one should make that assessment. When Fry's college lover calls on him to help a young man -- whom the lover describes as a brilliant scientist -- those issues come front and center. Who gets saved -- and at what price?

I found this a little slow to get into, in spite of my existing interest in Fry and his activities. And I'd still urge anyone interested in the tale to read "Villa Air-Bel" by Rosemary Sullivan, the immensely readable non-fiction account of these events. Orringer draws on it heavily but has taken some creative license, in ways that sometimes worked for me, and sometimes felt like they were a step too far. But overall, this was a tremendously readable novel. Best of all, Orringer doesn't adopt that slyly knowing stance that too many of those writing about World War II do -- her characters understand that there is serious threat to those they are helping leave Europe, but there aren't any anachronistic hints about exactly WHAT was about to happen in Poland and eastern Europe, or overly-heavy foreshadowing. Her characters know what they could have known at the time, no more and no less. They understand the serious threats to those who think and speak freely, even as they struggle to understand how it could have gone so wrong. And it's to Orringer's credit that she has found ways to combine a sense of personal vulnerability on Fry's part -- she emphasizes his sexuality, and the background of his lover as main plot threads -- with the broader story.

I received an advance e-galley from the publisher via Edelweiss; my views are my own...
Show Less
3 more
LibraryThing member lauralkeet
Varian Fry was an American journalist who, after witnessing Nazi atrocities, formed the Emergency Rescue Committee in occupied France. Fry and his staff went to great measures to help those under threat escape, circumventing the usual French visa processes and working tirelessly to find new avenues
Show More
for smuggling people to safety. In The Flight Portfolio, Julia Orringer attempts a deeply personal portrait of Fry, focused largely on his relationship with college friend Elliott Grant, who turns up in Marseille after a twelve-year separation.

I found most of this novel to be a page-turner, sometimes because I desperately wanted refugees to reach safety, and at other times because of developments between Fry and Grant. There is historic basis for Fry to have had romantic relationships with men, and extremely likely that the details would have been a closely guarded secret. The love story unfolded in the context of the Emergency Rescue Committee’s work and became the predominant focus of the novel. I would have liked more emphasis on how the ERC’s work: how they determined which people to save, and the details of their rescue missions.

Because Grant was a fictional character, Orringer eventually needed to write their relationship out of the story so Fry could resume the life that is known to history. Unfortunately, she did this by having Fry make an uncharacteristically snap decision near the end of the novel. Normally astute and savvy, he came unglued and acted in ways that were not believable. While this was a tidy way to deal with “the Grant problem,” it came at a point when Fry had lost the support of the US government and was being ousted from France. I would have preferred Orringer to focus primarily on how he dealt with that situation.

In short, while I enjoyed The Flight Portfolio, I would have preferred more balanced coverage between Fry’s personal life and his work.
Show Less
LibraryThing member HandelmanLibraryTINR
Bestselling author of The Invisible Bridge has brought us another gripping historical novel based on the true story of Varian Fry’s extraordinary attempt to save the work, and the lives, of Jewish artists fleeing the Holocaust. Fry, working with the Jewish Rescue Board, rescued more than 2,000
Show More
European dissidents and artists. In addition to recounting his daring work, the novel delves into Fry’s inner life, giving him a back story that involves daring and elusion. NY Times reviewer and author, Cynthia Ozick, calls it a “sympathetic and prodigiously ambitions novel”.
Show Less
LibraryThing member Zoes_Human
Uff, no. Prolix and overwrought. DNF @ 20 pages.
Fewer