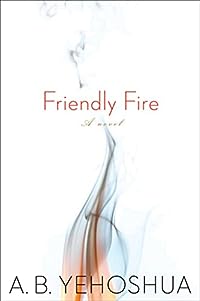 by Abraham B. Yehoshua

"A couple, long married, are spending an unaccustomed week apart. Ya'ari, an engineer, is busy juggling the day-to-day needs of his elderly father, his children, and his grandchildren. His wife, Daniela, flies from Tel Aviv to East Africa to mourn the death of her older sister. There she confronts her anguished brother-in-law, Yirmiyahu, whose soldier son was killed six years earlier in the West Bank by "friendly fire." Yirmiyahu is now managing a team of African researchers digging for the bones of man's primate ancestors as he desperately strives to detach himself from every shred of his identity, Jewish and Israeli." "With great artistry, A. B. Yehoshua has once again written a rich, compassionate, rewarding novel in which sharply rendered details of modern Israeli life and age-old mysteries of human existence echo one another in complex and surprising ways."--BOOK JACKET.… (more)

LibraryThing member SqueakyChu
It is Chanukah, and candles are lit for eight consecutive days. During this time Daniela, an English teacher in Israel, leaves her husband to visit her brother-in-law Yirmiyahu in Tanzania to more fully experience the death of her own sister Shuli.

This story develops as a duet by alternating
Show More
chapters; one for the wife, one for her husband Amotz. While Daniela is in Africa, Amotz is left tending both family and work problems. Though Amotz makes light of his duties to everyone, the reader can see how heavily both weigh on him.

The tone of the book is melancholy with a few light moments, though those were brief. The saddest part for me was brother-in-law Yirmiyahu's total rejection of all things Jewish and Israeli. Knowing at the beginning of the book that Yirmiyahu's son had been killed by "friendly fire", the details of what really happened were totally disheartening and led to a pregnant Palestinian woman becoming a symbol of despair for Yirmiyahu as well as myself.

I didn't think I was going to like this book as much as I did. The story moved slowly and into many nooks and crannies (as well as an elevator shaft). By the time I finished it, however, I felt very satisfied with the eight days I shared with Daniela and Amotz.
Show Less
1 more
LibraryThing member kellyn
Overall I really enjoyed this novel in which "nothing really happens" but everyday life. Interestingly the novel felt claustraphobic, enclosed, and intensely introspective even though much of the book takes place on the African plain. I found Ya'ari, the 60 year old husband of Daniela, endearing
Show More
yet know that he would not be an easy man with whom to live . I don't feel that I came to know or understand Daniela although this might be a reflection of the author's skill in expressing her state of befuddlement and "fogginess" since the death of her beloved sister.
Ya'ari and Daniela each had specific expectations for the week that they were apart. Events, however, overtook each of them and their weeks were nothing like they expected. Ya'ari and Daniela were buffetted by memories, surprises, preconceived ideas, anger and misunderstanding.
Definately worth reading.
Show Less
Fewer