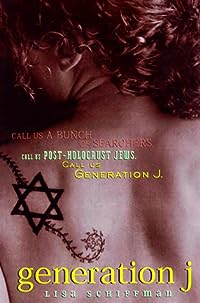 Generation J: Call Us a Bunch of Searchers. Call Us Post-Holocaust Jews

"I'm not alone. I am part of a generation of fragmented Jews. We're in a kind of limbo. We're suspended between young adulthood and middle age, between Judaism and atheism, between a desire to believe in religion and a personal history of skepticism. Call us a bunch of searchers. Call us post-Holocaust Jews. Call us Generation J." Generation J is the ambivalent generation: unaffiliated seekers, men and women who have grown up questioning the bounds of organized religion. Lisa Schiffman is one of these seekers, and Generation J chronicles her journey through the contradictory landscape of Jewish identity. Moving from the personal to the universal, from autobiography to anthropology, from laughter to tears, Schiffman shows us the many ways in which one can be religious. Whether dipping into a ritual bath, getting henna-tattooed with the Star of David, unravelling the mysteries of the kabbalah, or confronting what Jewish tradition has to say about gay marriage, Schiffman reveals the conflicts of meaning and connection common to all who try to chart their own spiritual path. And, through it all, with humor and sensitivity, she confronts the reasons for her own quest and begins to untangle some of the thorniest questions about identity, community, and religion in America today. This engaging exploration of what it means to be Jewish is every bit as much a fascinating tour of the varieties of contemporary Jewish practice as it is an unusual personal quest. Smart, funny, and provocative, Schiffman brilliantly explores the problems and possibilities facing any spiritual seeker today.  … (more)

LibraryThing member raizel
A young woman explores what being Jewish means to her through interviews and personal research and observance. The cover says, over a photograph of a star of David set within a vine, "Call us a bunch of searchers. Call us Post-Holocaust Jews. Call us Generation J."
Ms. Shiffman concludes, "What was
Show More
essential to Judaism? To my Judaism? Books and people." [p. 156] And "My Judaism was a trajectory, a continuum, an intuitive process punctuated by moments of cognition. Some days it was a brain-based religious thing, full of demands for logic and a grapple with text. Some days it was a feeling of identity. Some days it was in my body, my marrow; it coursed through my veins. Some days it was something best understood by he senses. On those days I often found a few seconds of peace, a sense of wholeness. [p. 157]
Show Less

Growing up Jewish: An Anthology by Jay David
Stars of David: Prominent Jews Talk About Being Jewish by Abigail Pogrebin
How to Get More Out of Being Jewish even if you are not sure you believe in God, you think going to synagogue is a waste of time, you think keeping kosher is stupid, you hated Hebrew school, or all of the above by Gil Mann
The Vanishing American Jew: In Search of Jewish Identity for the Next Century by Alan M. Dershowitz
The New Rabbi: A Congregation Searches For Its Leader by Stephen Fried
27 more
The Five Books of Miriam: A Woman's Commentary on the Torah by Ellen Frankel
Jew vs. Jew: The Struggle for the Soul of American Jewry by Samuel G. Freedman
I am Jewish: Personal Reflections Inspired by the Last Words of Daniel Pearl by Judea Pearl
The New Jewish Baby Book: Names, Ceremonies & Customs -- A Guide for Today's Families by Anita Diamant
Gates of Mitzvah: A Guide to the Jewish Life Cycle by Simeon J. Maslin
American Judaism by Nathan Glazer
How to Run a Traditional Jewish Household by Blu Greenberg
Does the World Need the Jews? Rethinking Chosenness and American Jewish Identity by Daniel Gordis
The American Jews: Portrait of a Split-Personality by James Yaffe
Jewish and Female: Choices and Changes in Our Lives Today by Susan Weidman Schneider
Living a Jewish Life: Jewish Traditions, Customs, and Values for Today's Families by Anita Diamant
Saying Kaddish: How to Comfort the Dying, Bury the Dead & Mourn As a Jew by Anita Diamant
The Second Jewish Catalog: Sources & Resources by Sharon Strassfeld
Deborah, Golda, and Me: Being Female and Jewish in America by Letty Cottin Pogrebin
A Certain People: American Jews and Their Lives Today by Charles E. Silberman
The Jews in America: The Roots, History, and Destiny of American Jews by Max I. Dimont
40 Things You Can Do to Save the Jewish People: Parenting Tips for Raising "Good Enough" Jewish Kids by Joel Lurie Grishaver
The New Jewish Wedding by Anita Diamant
Chutzpah by Alan M. Dershowitz
On Women and Judaism: A View from Tradition by Blu Greenberg
Judaikitsch: Tchotchkes, Schmattes, and Nosherei by Jennifer Traig
Great Jewish Women by Elinor Slater
Stalking Elijah: Adventures with Today's Jewish Mystical Masters by Rodger Kamenetz
The Golden Tradition: Jewish Life and Thought in Eastern Europe by Lucy S. Dawidowicz
Mingled Roots: A Guide for Jewish Grandparents of Interfaith Grandchildren by Sunie Levin
The Jewish Way in Death and Mourning by Maurice Lamm
"The Rest of Us": The Rise of America's Eastern European Jews by Stephen Birmingham
Fewer