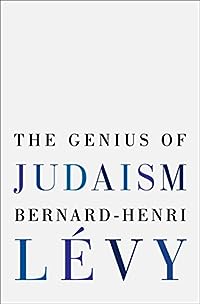 The Genius of Judaism

oA world without Jews would not be a world. A world in which the Jews once again would become the scape goats for all people's fears and frustrations would be a world in which free people could not breathe easy.o Today, anti-Semitism is on the rise in countries all around the world. This bigotry imperils millions of men, women and children. It is also a rejection of the glories of Judaism- the ideas of man and God, of history and time, of power, voice, light, liberty, revolt, memory and nature that have informed and enriched both Western and Eastern cultures for millennia. In his most personal book yet, Bernard-Henri LUvy reveals how his life has been shaped by his faith. It compelled him to become oThe Godfather of the Arab Spring,o just as the realization that so many of our notions about history, the individual, and freedom of thought are fundamentally Jewish transformed his philosophy. This is a riveting, impassioned narrative from one of our foremost thinkers.… (more)

Moses: A Human Life by Avivah Gottlieb Zornberg
Great Jewish Thinkers of the Twentieth Century Edited with introductory essays by Simon Noveck
Broken Tablets: Restoring the Ten Commandments and Ourselves by Rachel Mikva
If All the Seas Were Ink: A Memoir by Ilana Kurshan
Judaism's 10 Best Ideas: A Brief Guide for Seekers by Arthur Green
9 more
The Talmud: A Biography - Banned, Censored and Burned -- The Book They Couldn't Suppress by H. Freedman
Israel and the World: Essays in a Time of Crisis by Martin Buber
Bar Mitzvah by Sarah Silberstein Swartz
Parenting Jewish Teens: A Guide for the Perplexed by Joanne Doades
Judaism as a Civilization: Toward a Reconstruction of American Jewish Life by Mordecai Menahem Kaplan
Halakhic Man by Joseph Dov Soloveitchik
Saying Kaddish: How to Comfort the Dying, Bury the Dead & Mourn As a Jew by Anita Diamant
The Vanishing American Jew: In Search of Jewish Identity for the Next Century by Alan M. Dershowitz
The Second Jewish Book of Why by Alfred J. Kolatch
Fewer