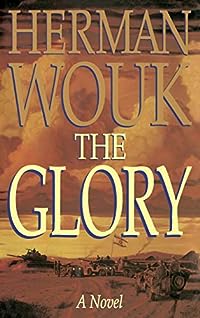 The Glory a novel

Like no other novelist at work today, Herman Wouk has managed to capture the sweep of history in novels rich in character and alive with drama. In "The Hope," which opens in 1948 and culminates in the miraculous triumph of 1967's Six-Day War, Wouk plunges the reader into the story of a nation struggling for its birth and then its survival. As the tale resumes in "The Glory," Wouk portrays the young nation once again pushed to the brink of annihilation -- and sets the stage for today's ongoing struggle for peace. Taking us from the Sinai to Jerusalem, from dust-choking battles to the Entebbe raid, from Camp David to the inner lives of such historical figures as Golda Meir, Moshe Dayan, and Anwar Sadat, these extraordinary novels have the authenticity and authority of Wouk's finest fiction -- and together strike a resounding chord of hope for all humanity.… (more)

Mitla Pass by Leon Uris
This Is My God by Herman Wouk
The Covenant by Naomi Ragen
Chutzpah by Alan M. Dershowitz
Deborah, Golda, and Me: Being Female and Jewish in America by Letty Cottin Pogrebin
18 more
As a Driven Leaf by Milton Steinberg
The Book of Lights by Chaim Potok
The Outsider by Howard Fast
Stars of David: Prominent Jews Talk About Being Jewish by Abigail Pogrebin
The Oath by Elie Wiesel
A Beggar in Jerusalem by Elie Wiesel
The Second Jewish Book of Why by Alfred J. Kolatch
Jewish Family & Life traditions, holidays, and values for today's parents and children by Yosef I. Abramowitz
Great Jews in Sports by Robert Slater
The Will to Live On: This is Our Heritage by Herman Wouk
How to Get More Out of Being Jewish even if you are not sure you believe in God, you think going to synagogue is a waste of time, you think keeping kosher is stupid, you hated Hebrew school, or all of the above by Gil Mann
On Women and Judaism: A View from Tradition by Blu Greenberg
Abba Eban: An Autobiography by Abba Solomon Eban
The Outside World by Tova Mirvis
Rashi's Daughters - Book I: Joheved by Maggie Anton
Rashi's Daughters - Book II: Miriam by Maggie Anton
The Book of Abraham by Marek Halter
Sabbath: The Day of Delight by Abraham Ezra Millgram
Fewer