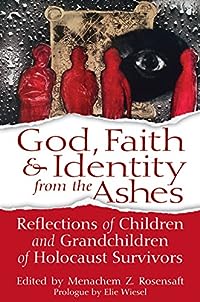 God, Faith & Identity from the Ashes: Reflections of Children and Grandchildren of Holocaust Survivors

LibraryThing member MarthaHuntley
I saw this book of reflections of children and grandchildren of Holocaust survivors in the New York Review of Books in the clubhouse. Ordered it because having just finished two books about/by child survivors of the Holocaust, I'm very interested in their children's experiences. And very fitting
Show More
that I start reading this the morning after our return from Korea and the 5.18 Memorial Foundation events just experienced. Many parallels - the importance of God and Faith, Identity, Memory, and Tikkun Olam - changing the world for the better. Making good use of the family/community tragedies, pain, suffering, sorrow and losses. Sharing memories to preserve memories and to make them positive instruments of good. Faith experiences (or not) are all over the spectrum, from atheism to deep, abiding faith in an abiding God, but the message is ongoing and powerful - evil exists, and we cannot ignore it. The light yet shines in the darkness, and the darkness has not overcome it. This book is truly a gift to the world.
Show Less

Out of the Whirlwind: A Reader of Holocaust LIterature a reader of holocaust literature by Albert H. Friedlander
Children of the Holocaust: Conversations with Sons and Daughters of Survivors by Helen Epstein
The Lost: A Search for Six of Six Million by Daniel Adam Mendelsohn
Karski: How One Man Tried to Stop the Holocaust by E. Thomas Wood
A Quiet American: The Secret War of Varian Fry by Andy Marino
4 more
Escape from the Holocaust by Kenneth Roseman
The Survivor: An Inspiring True Story by Jack Eisner
Yiddish: A Nation of Words by Miriam Weinstein
Schindler's Legacy: True Stories of the List Survivors by Elinor J Brecher
Fewer