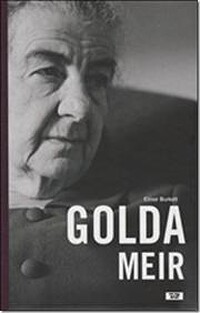 The first female head of state in the Western world and one of the most influential women in modern history, Golda Meir was one of the founders of the State of Israel, the architect of its socialist infrastructure, and its most tenacious international defender. Historian-journalist Burkett looks beyond Meir's well-known accomplishments to the complex motivations and ideals, personal victories and disappointments, of her charismatic public persona. Beginning with Meir's childhood in virulently anti-Semitic Russia and her family's subsequent relocation to the United States, Burkett places Meir within the framework of the American immigrant experience, the Holocaust, and the singlemindedness of a generation that carved a nation out of its own nightmares and dreams.--From publisher description.… (more)

LibraryThing member LiteraryLinda
Golda Meir was the first female head of state in the Western world. She was also one of the most influential women in modern history. This biography of her tells us of her demeanor, how she was admired or not by various people of government, what she was best at, and how she became head of state.
Show More
It was very eye-opening for me. It is an interesting story. It makes me wonder how much more successful she would have been with more education and a slighly different personality.
Show Less
1 more
LibraryThing member everfresh1
I thought I knew quite a lot on this subject but this book opened my eyes. Great book, great person.
Fewer

My Life by Golda Meir
A Safe Haven: Harry S. Truman and the Founding of Israel by Allis Radosh
The Prime Ministers: An Intimate Narrative of Israeli Leadership by Yehuda Avner
Arab and Jew: Wounded Spirits in a Promised Land by David K. Shipler
Sharon: Israel's Warrior-Politican by Anita Miller
14 more
The Israelis: Founders and Sons by Amos Elon
The Jews in the Twentieth Century: An Illustrated History by Martin Gilbert
O Jerusalem! by Larry Collins
My Mother, Golda Meir: A Son's Evocation of Life with Golda Meir by Menahem Meir
The Man in the White Sharkskin Suit: A Jewish Family's Exodus from Old Cairo to the New World by Lucette Matalon Lagnado
In the land of Israel by Amos Oz
From Time Immemorial: The Origins of the Arab-Jewish Conflict Over Palestine by Joan Peters
As a Driven Leaf by Milton Steinberg
I Seek My Brethren: Rescue, Relief and Reconstruction -- The Work of the American Jewish Joint Distribution Committee Ralph Goldman and "The Joint" by Tom Shachtman
Jerusalem: City of Mirrors by Amos Elon
The Jews in America by David Cohen
The Rabin Memoirs by Yitzhak Rabin
Standing with Israel by David Brog
Saying Kaddish: How to Comfort the Dying, Bury the Dead & Mourn As a Jew by Anita Diamant
Fewer