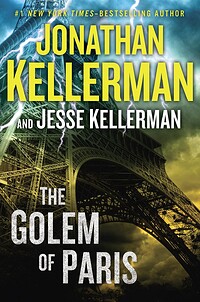 The Golem of Paris

"From two #1 bestselling masters of crime fiction comes an extraordinary thriller about family, murder, and the secrets that refuse to stay buried. It's been more than a year since LAPD detective Jacob Lev learned the remarkable truth about his family, and he's not coping well. He's back to drinking, he's not talking to his father, the LAPD Special Projects Department continues to shadow him, and the memory of a woman named Mai haunts him day and night. And while Jacob has tried to build a bridge to his mother, she remains a stranger to him, imprisoned inside her own tattered mind. Then he comes across the file for a gruesome unsolved murder that brings the two halves of his life into startling collision. Finding the killer will take him halfway around the world, to Paris--the city of romance, but also of gritty streets, behind the lights. It's a dangerous search for truth that plunges him into the past. And for Jacob Lev, there is no place more frightening. Jonathan Kellerman has long been known for his mastery of criminal psychology and his ability to create thrilling novels of nuanced drama and suspense. But in The Golem of Paris, he and Jesse Kellerman raise that suspense to a whole new level"--… (more)

LibraryThing member jfe16
When LAPD Detective Jacob Lev is reduced to spending his days in an old warehouse computerizing boxes of files containing cold cases, he discovers the file of a brutal murder case that has connections to his mother’s past and might possibly hold the key to what has caused her to fall into a
Show More
catatonic state. Ultimately, his investigation of this case opens a Pandora’s box with a similar murder in Paris, a ruthless, cruel Russian autocrat, and some inscrutable creatures that seem to exist solely to bring about a day of reckoning.
Can Jacob solve the case and find justice for the victims? Will the connection to his mother give him the answers he’s never found regarding his family? And what of Mai?

Following “The Golem of Hollywood,” the narrative alternates between Jacob’s present day investigations and events involving his mother in 1982 Prague. Woven together, the stories are captivating; the intricate plot, well-developed characters, and first-rate writing create a masterful novel of suspense.

Recommended.
Show Less
8 more
LibraryThing member Bookish59
Glad the Golem series continues. It succeeds on many levels, Jewish mysticism, mystery / police investigation, and best of all with Jacob Lev's personal life. He has a VERY unique relationship to the Golem, Mai, and unusual parent issues. After learning about the mother he barely knows, he tries to
Show More
find his way to creating a meaningful relationship with a profoundly damaged woman, and wants desperately to forgive his father.

Great read!
Show Less
LibraryThing member Ronrose1
This is a followup novel to “The Golem of Hollywood”. I haven’t read that book, but I must say this one stands up very well on it’s own merit. LAPD Detective Jacob Lev is off the wagon again. Who wouldn’t be after what he has seen. I’m not talking about the day to day horrors of Los
Show More
Angeles crime. Jacob has seen a dark legend come to life. The Jewish legend of the Golem is a reality. The supernatural being created to protect the Jews of Poland is loose and dangerous. Jacob is somehow tied to the creature he knows as Mia. Mysterious strangers are tailing Jacob hoping he will lead them to her. Jacob is hoping on one hand that he never sees Mia again, but on the other hand she has left him with a strange self destructive yearning to solve the mysterious tie between his mother and the Golem. While working, or is it hiding, in the LAPD Cold Case Unit buried within stacks of unsolved cases, Jacob finds one file that grabs his attention and won’t let go. A mother and her young son were found murdered in an alley. Both were shot once in the middle of the forehead. The bodies were posed sitting, facing each other. Their eyelids were cut so the bodies appeared to be gazing at each other even in death. Few clues were found at the scene. The case was reviewed by two different detectives, but nothing came of the investigations. There is something about this case that Jacob just can’t turn loose. The trail of these murders and his mother’s connection to the Golem will cross in unexpected and dangerous ways. Book provided for review by Amazon Vine.
Show Less
LibraryThing member lauriebrown54
“The Golem of Paris” is a much, much darker tale than its predecessor, “The Golem of Hollywood”. At the end of that story, protagonist Jacob Lev found out that his mother, Bina, who he thought had died when he was a child, was alive, catatonic, and locked up in a mental institution. This
Show More
book is in large part her story, of what she went through that drove her mad – and how it ties into the mystical Golem storyline.

The other main storyline is the police case that Lev is on. Assigned to scanning and digitizing cold cases in an old warehouse, he finds himself intrigued by a gruesome ten year old case of the murder of a mother and son. It’s a very unique MO, and Special Projects (the division of LAPD that Lev became of part of in TGOH, which seems to be staffed mainly people who may not be quite human) okays him to go to Paris to investigate.

Like TGOH, TGOP is all over the map. Millionaire Russians, a really intense fight scene that seems unwinnable, Czech black ops, the supernatural; it’s all in there. Like TGOH, TGOP does not resolve all the issues by the end, but Lev (and us readers) have learned enough to make us even more avid to find out how it all resolves. What exactly are the Special Projects people? Why is the spirit of the Golem so dangerous? And what else is Lev’s father, a rabbinical scholar, hiding? He hid that Bina was alive and that he and Jacob are direct descendants of the Rabbi of Prague; there has to be more. He’s in the story too much *not* to be more than he appears.

The story can be hard to follow at times. I found myself having to go back to the start of chapters frequently to figure out exactly who and when the scene is about. But I found it worth the effort. Looking forward to seeing where this series takes us.
Show Less
LibraryThing member Virginia51
This was almost as good as the first in the series but it was a little confusing at times. You must read the first in the series to know what is going on in this book. I love the characters. I hope there will be more.
LibraryThing member decaturmamaof2
I liked this one as much as the first
LibraryThing member jennybeast
I really enjoyed the first book in the series, so I was surprised at how much I did not enjoy this one. I think mostly it was that I felt like I had to remember all the details from the first to have any idea what was going on, but also that I just stopped caring about the characters.
LibraryThing member gail616
The book started out very slowly. I struggled to follow what was going on. About halfway through I got hooked. Rey much enjoyed the book!!
LibraryThing member Carolee888
I have always loved books by Jonathan Kellerman, especially the ones he wrote with his wife, Faye Kellerman so I am very surprised to give this book such a low rating. I did not enjoy it.

There is currently quite a few books that use magical realism, my favorite is The Life of Pi. I have read and
Show More
reviewed some and liked them but this one really disappoints me. It is so dark and I have trouble reading a story about an LA policeman and a shape shifter. I accept some of the fault myself because I did not read The Golem of Hollywood, the preceding book in this series. Even though the authors did fill the readers in with the back
story, I felt lost and in a strange word with the Mai, the golem and the one that he fell so hard for.

I took notes on the beginning of the book and still was lost and confused about what was going on except the Bina, Jacob Lev’s mother. It was much easier for me to follow her story and I felt sad for her, a young idealistic girl who was arrested and taken as a political prisoner.

I pushed myself to the end of the story partly because I remember the Jonathan Kellerman’s books. This book is written for a different audience, it is meant for people who love the paranormal and dark stories not for mystery readers. This book headed in a direction that I did not want to go.

I received this Advance Reading Copy from the publisher as a win from FirstReads but that in no way influenced my thoughts or feelings in this review.
Show Less
Fewer