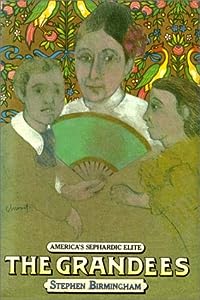 Tracing their origins to medieval Portugal and Spain, the Sephardic Jews consider themselves 'the nobility of Jewry, ' in contrast to their pushier and more aggressive German counterparts. They were also the first Jews to inhabit the new world--first exiled from Spain and Portugal, and then forced out of Brazil, a ship bearing 23 Sephardic Jews was blown off its course to Holland, beset by pirates, and then captured by a French captain before being ransomed for the 'payment of their freight' in the City of New Amsterdam. And so the American Sephardic Jewish story begins. Here Stephen Birmingham tells the rich and varied history of this insular group of bewilderingly interrelated families, spiced with gossip and the gentle rattling of family skeletons. We find tales of fortunes made in the fur trade long before the Astors, revolutionary heroes and heroines, and poetic spinster Rebecca Gratz, thought to be Scott's model for Rebecca in Ivanhoe. Through it all emerges a picture of a proud haughty people, who have chosen to remain aloof from the later-arriving Jews from Europe, and have staunchly refused to be swept up in the movement of Reform Judaism, preferring to adhere to their Orthodox rituals. Stephen Birmingham weaves a vibrant tapestry of the Sephardic experience in America, working in threads of their history in medieval Europe as he depicts the lives of these extraordinary Americans.… (more)

LibraryThing member lyssrose
Knowing very little about Jewish history, I found this book constantly amazing me, by pointing out the Jewish players of historical events (players that most school textbooks omit from their narrations). The timeline jumps back and forth a bit; later chapters will reference "future" events of
Show More
certain characters, which have already been explained in previous chapters. Since this book was written in the early '70s, several of the author's attempts to bring modern and current society members into the mix were wasted on me, and only served to force me to google those people, to learn what the references were.
Show Less
1 more
LibraryThing member keylawk
So, it's true, Jews really ARE involved in many of the events of the world. Well, the "jewish conspiracy" theory is PART right. Jews have been "involved", their lives and fortunes on the line, in many of the great ventures of human kind BUT NOT AS CONSPIRATORS. They were participating, and usually
Show More
were not given the credit. They often got the "blame"! Even in America, where the Revolution owed its success to a Jewish financier, far from the pogroms of the shtetl in Europe, even in America, the Jew was written out of the history, cut out of the profits, maneuvered away from the rewards and recognition. The Jew was allowed to be "leader" only in the line of SCAPEGOATS to be blamed for the failures. Thank Gd these people don't go into blood feuds every time they suffer "humiliation". Thank Gd these people are so willing to "forget" the worst humiliations. And thank Gd they ARE behind so many of the truly wonderful events that we all should be proud of.
Show Less
Fewer

"The Rest of Us": The Rise of America's Eastern European Jews by Stephen Birmingham
Where Are We? The Inner Life of America's Jews by Leonard J. Fein
A Certain People: American Jews and Their Lives Today by Charles E. Silberman
The Jews in America: The Roots, History, and Destiny of American Jews by Max I. Dimont
The Jews in America: Four Centuries of an Uneasy Encounter by Arthur Hertzberg
18 more
World of Our Fathers: The Journey of the East European Jews to America and the Life They Found and Made by Irving Howe
How We Lived: A Documentary History of Immigrant Jews in American, 1880-1930 by Irving Howe
Great Jews in Sports by Robert Slater
The Jews in America by David Cohen
My People: The Story of the Jews by Abba Solomon Eban
How to Get More Out of Being Jewish even if you are not sure you believe in God, you think going to synagogue is a waste of time, you think keeping kosher is stupid, you hated Hebrew school, or all of the above by Gil Mann
The Second Jewish Catalog: Sources & Resources by Sharon Strassfeld
A Treasury of Jewish Humor: A Classic Collection of Humorous Stories, Satires and Witticism from the Rich Jewish Literature of All Times by Nathan Ausubel
Guess Who's Jewish in American History by Lionel Koppman
Chutzpah by Alan M. Dershowitz
Great Jewish Thinkers of the Twentieth Century Edited with introductory essays by Simon Noveck
Jew vs. Jew: The Struggle for the Soul of American Jewry by Samuel G. Freedman
Sabbath: The Day of Delight by Abraham Ezra Millgram
Jewish and Female: Choices and Changes in Our Lives Today by Susan Weidman Schneider
Deborah, Golda, and Me: Being Female and Jewish in America by Letty Cottin Pogrebin
A History of the Jewish Experience Book 1, Torah and history : Book 2, Torah, mitzvot, and Jewish thought by Leo Trepp
The Book of Jewish Knowledge: A Concise Encyclopedia of Judaism and the Jewish People Covering all Elements of Jewish Life from Biblical Times to the Present by Nathan Ausubel
Great Jewish Women by Elinor Slater
Fewer