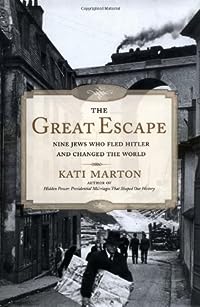 The Great Escape: Nine Jews Who Fled Hitler and Changed the World

Journalist Marton brings to life an unknown chapter of World War II: the tale of nine men who grew up in Budapest's brief Golden Age, then, driven from Hungary by anti-Semitism, fled to the West, especially to the United States, and changed the world. These nine men, each celebrated for individual achievements, were actually part of a unique group who grew up in a time and place that will never come again, shaped by Budapest's lively café life before the darkness closed in. She follows the lives of four history-changing scientists who helped usher in the nuclear age and the computer (Edward Teller, John von Neumann, Leo Szilard, and Eugene Wigner); two major filmmakers (Michael Curtiz, who directed Casablanca, and Alexander Korda, who produced The Third Man); two immortal photographers (Robert Capa and Andre Kertesz); and one seminal writer (Arthur Koestler, Darkness at Noon).--From publisher description.… (more)

LibraryThing member Sandydog1
The title is exciting; it sounds like a harrowing adventure similar to Paul Brikhill's Luftstalag breakout with a similar title. But other than perhaps some visa glitches, the 9 Hungarian Jews apparently had no real harrowing challenges to escaping pre-WW II Europe. They had the foresight to leave
Show More
Budapest in plenty of time, and most ended up in the USA. Marton follows the fascinating and productive lives of 4 scientists (Teller, von Neumann,Szilard, Wigner) 2 movie makers (Cutiz, Korda) 2 photographers (Capa, Kertesz) and a writer (Koestler). She is a wonderful writer, but Her Julio Cortazar-esque mixing of nine biographies makes things a bit confusing.
Show Less
1 more
LibraryThing member Eliz12
Yes, the title is misleading. There is no great drama here in terms of a physical escape.
Yet this IS a dramatic story filled with romance, friendship and betrayal, death, Hollywood and some of the greatest mathematical minds in the world.
I loved this book. It gives an intimate (though brief)
Show More
portrait of a collection of thoroughly fascinating figures.
Show Less
Fewer

The Survivor: An Inspiring True Story by Jack Eisner
The Holocaust Years: The Nazi Destruction of European Jewry, 1933-1945 by Nora Levin
Out of the Whirlwind: A Reader of Holocaust LIterature a reader of holocaust literature by Albert H. Friedlander
Poyln: Jewish Life in the Old Country by Alter Kacyzne
Deborah, Golda, and Me: Being Female and Jewish in America by Letty Cottin Pogrebin
13 more
The Abandonment of the Jews: America and the Holocaust, 1941-1945 by David S. Wyman
The Inextinguishable Symphony: A True Story of Music and Love in Nazi Germany by Martin Goldsmith
Personal Witness: Israel Through My Eyes by Abba Solomon Eban
In the Lion's Den: The Life of Oswald Rufeisen by Nechama Tec
Escape from the Holocaust by Kenneth Roseman
The Fugu Plan: The Untold Story of the Japanese and the Jews During World War II by Marvin Tokayer
The Avengers: A Jewish War Story by Rich Cohen
I am Jewish: Personal Reflections Inspired by the Last Words of Daniel Pearl by Judea Pearl
The Jews: A Treasury of Art and Literature by Sharon R. Keller
Children of the Holocaust: Conversations with Sons and Daughters of Survivors by Helen Epstein
Ellis Island to Ebbets Field: Sport and the American Jewis Experience by Peter Levine
While Six Million Died: A Chronicle of American Apathy by Arthur D. Morse
The End of the Holocaust by Alvin H. Rosenfeld
Fewer