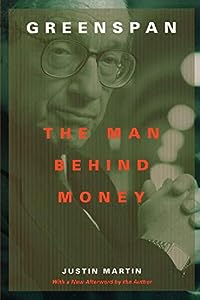 Greenspan: The Man Behind the Money

Greenspan: The Man Behind Money presents the famous Fed Chairman as few know him. It spans his hardscrabble childhood in Depression-era New York City, his fascinating decades-long friendship with controversial author Ayn Rand, his Juilliard education and days spent touring with Henry Jerome's jazz band, as well as two marriages, a dynamic D.C. social life, and service to six U.S. presidents. Based on unprecedented access to Greenspan's family members and peers, including Henry Kissinger, Gerald Ford, and Milton Friedman, Greenspan: The Man Behind Money is the only book to shed real light on one of the most private public figures of our time.

Staying Tuned: A Life in Journalism by Daniel Schorr