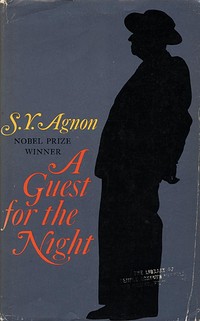 A Guest for the Night

A Guest for the Night (first published in 1939 as Germany invaded Poland) is Agnon¿s depiction of how all modern movements aside from Zionism ¿ secularism, Haskalah, socialism, communism ¿ failed to provide a viable alternative to traditional life. But, he is clear, even traditional life was untenable, because it all fell apart from within before the first furnaces were ignited in Auschwitz. Even the Guest¿s well-intentioned attempt to revivify and to re-engage the lost world of piety is also doomed. The Alte Heim, the old home, can no longer exist ¿ it is a place where we can only be passing guests for the night. Therefore ¿you can¿t go home again,¿ but not for the reasons that Thomas Wolfe suggests; rather, because home no longer exists. It has to be rebuilt, but it can only be rebuilt in the Bayit Hadash, in the new home in the Land of Israel. This is Agnon¿s greatest theme in the novel and, in differing ways, throughout his body of writing: The idea that modern man, modern Jews, are alienated from their spiritual home. While we can¿t go home again, that doesn¿t mean we can¿t move forward through conceiving of a new home ¿ although doing so comes with the great danger of being caught in the disconnect between the old and the new, between what was and what might be. Translated by Misha Louvish, with a new Foreword by Jeffrey Saks.… (more)

LibraryThing member franoscar
I guess this is a great book. It is long. The author develops an original narrative style which I assume is based on rhythms in the Torah. He paints an in-depth picture of a time & place, East Europe (Austria) between the Wars, when all the changes wrought by WW1 were playing out but the specific
Show More
threats of the Nazis were not yet apparent. People thought they had choices, they went to America, they went to IPalestine ("The Land"), they stayed there. It is an amazing story of a history that stopped. The narrator is forced out of Palestine by violence so he goes back to where he grew up, and he contrasts what used to be with what now is.
Show Less

Two Tales: Betrothed & Edo and Enam by S.Y. Agnon
Growing up Jewish: An Anthology by Jay David
Inside Kasrilevke by Sholem Aleichem
Days of Awe: A Treasury of Traditions, Legends and Learned Commentaries Concerning Rosh Ha-Shanah, Yo Kippur and the Days Between by Shmuel Yosef Agnon
Herzl by Amos Elon
13 more
Unto Death: Two Novellas -- Crusade and Late Love by Amos Oz
Balm in Gilead: The Story of Hadassah by Marlin Levin
Sabbath: The Day of Delight by Abraham Ezra Millgram
Israel: A Personal History by David Ben-Gurion
Great Jewish Thinkers of the Twentieth Century Edited with introductory essays by Simon Noveck
The Rise of David Levinsky by Abraham Cahan
In the land of Israel by Amos Oz
Rembrandt, the Jews and the Bible by Franz Landsberger
Life Is With People: The Culture of the Shtetl by Mark Zborowski
A Late Divorce by Abraham B. Yehoshua
Death Had Two Sons by Yal Dayan
A History of the Jewish Experience Book 1, Torah and history : Book 2, Torah, mitzvot, and Jewish thought by Leo Trepp
The New Jewish Baby Book: Names, Ceremonies & Customs -- A Guide for Today's Families by Anita Diamant
Fewer