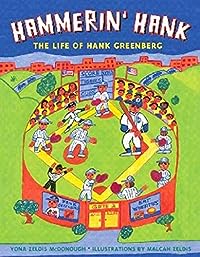 Meet one of America's earliest Jewish-American heroes. The 1930s were a time when "outsiders" were not welcome in Major League Baseball. Henry Benjamin Greenberg began as one of those outsiders, but went on to become one of baseball's greatest right-handed batters. Hammerin' Hank dominated baseball from 1933 to 1948 and was eventually inducted into the Baseball Hall of Fame. But Hank Greenberg was more than an amazing athlete. While Jews had been playing baseball since the 1800s, Hammerin' Hank was baseball's first Jewish superstar.

LibraryThing member STBA
This picture book biography details Hank Greenberg’s childhood and his college basketball and professional baseball career, as well as the anti-Semitism that he faced from fans and players and his encounter with Jackie Robinson.
1 more
LibraryThing member kirkonly
Hammerin’ Hank is about the life of Hank Greenberg. You find out where/when he grew up, what he liked to do in his space time, and what his family life was like. It also talks about his baseball career. You find out how he came to be with the Tigers, what happened while he was playing, and what
Show More
he did after he left. This is a great biography that any baseball lover will like.

As a student and fellow baseball lover I found this book very interesting. I didn’t know that hank was Jewish or that he was a very unathletic guy. The illustrations I didn’t like very much though. They looked like they were done by a young child. Other than that it was very informative.

As a teacher this would be a great book to get a reluctant student to read to me (if they liked sports). I could also use this book to shows how people have over come great obstacles to achieve their dream.
Show Less
Fewer