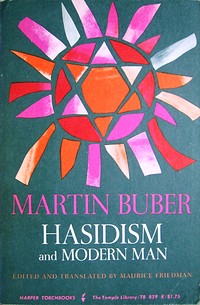 Hasidism, a controversial, mystical-religious movement of Eastern European origin, has posed a serious challenge to mainstream Judaism from its earliest beginnings in the middle of the eighteenth century. Decimated by the Holocaust, it has risen like a phoenix from the ashes and has reconstituted itself as a major force in the world of ultra-Orthodox Judaism. Philosopher Martin Buber found inspiration in its original tenets and devoted much of his career to making its insights known to a wide readership. First published in 1958, Hasidism and Modern Man examines the life and religious experiences of Hasidic Jews, as well as Buber's personal response to them. From the autobiographical "My Way to Hasidism," to "Hasidism and Modern Man," and "Love of God and Love of Neighbor," the essays span nearly half a century and reflect the evolution of Buber's religious philosophy in relation to the Hasidic movement. Hasidism and Modern Man remains prescient in its portrayal of a spiritual movement that brings God down to earth and makes possible a modern philosophy in which the human being becomes sacred.… (more)

Hasidic anthology tales and teachings of the Hasidim by Louis I. Newman
Souls on Fire: Portraits and Legends of Hasidic Masters by Elie Wiesel
The legend of the Baal-Shem by Martin Buber
The Origin and Meaning of Hasidism by Martin Buber
Sabbath: The Day of Delight by Abraham Ezra Millgram
18 more
The River of Light: Spirituality, Judaism, and the Evolution of Consciousness by Lawrence Kushner
Jewish and Female: Choices and Changes in Our Lives Today by Susan Weidman Schneider
The Rosh Hashanah Anthology by Philip Goodman
Judaism as a Civilization: Toward a Reconstruction of American Jewish Life by Mordecai Menahem Kaplan
Profiles in American Judaism: The Reform, Conservative, Orthodox, and Reconstructionist Traditions in Historical Perspective by Marc Lee Raphael
Israel: An Echo of Eternity by Abraham Joshua Heschel
Akiba: Scholar, Saint and Martyr by Louis Finkelstein
The Thirteen Petalled Rose by Adin Steinsaltz
Jewish Family & Life traditions, holidays, and values for today's parents and children by Yosef I. Abramowitz
The Golden Tradition: Jewish Life and Thought in Eastern Europe by Lucy S. Dawidowicz
Jewish Renewal: A Path to Healing and Transformation by Michael Lerner
Life Is With People: The Culture of the Shtetl by Mark Zborowski
On Women and Judaism: A View from Tradition by Blu Greenberg
Encyclopedia of Jewish Humor: From Biblical Times to the Modern Age by Henry D. Spalding
Great Jewish Thinkers of the Twentieth Century Edited with introductory essays by Simon Noveck
The Book of Legends: Sefer Ha-Aggadah, Legends from the Talmud and Midrash by Hayyim Nahman Bialik
The Jewish Woman: New Perspectives by Elizabeth Koltun
Stalking Elijah: Adventures with Today's Jewish Mystical Masters by Rodger Kamenetz
Fewer