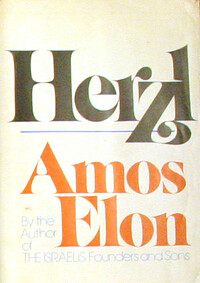 "In the second half of the nineteenth century a handful of statesmen, empire-builders, adventurers, and visionaries appeared on the stage of European history and proceeded to reshape the world in their own image--Cavour, Bismarck, Disraeli, Gladstone, Karl Marx. The results of their inspired, herculean undertakings are still manifest after three-quarters of a century, two world wars, the Cold War, and countless political and social upheavals. Perhaps the most colorful and unusual of these visionaries--but in the light of history, certainly not the least consequential--was Theodor Herzl (1860-1904), the founder of modern Zionism. Until 1895 Herzl was a boulevardier, a moderately successful playwright, and the Paris correspondent for Vienna's leading newspaper, Die Neue Freie Presse--in short, he was an assimilated nineteenth-century Jew. Then the Dreyfus Affair awakened him to the dangers of anti-Semitism. In a feverish, semimystical state he wrote a pamphlet that was to affect the lives of literally millions of people, The Jewish State: An Attempt at a Modern Solution of the Jewish Question. More importantly, he set afoot the plans that led to the modern state of Israel. Herzl devoted the last nine years of his life to his vision of creating an independent, sovereign Jewish state, traveling back and forth across Europe and the Middle East, negotiating with European sovereigns, statesmen, financiers, Jewish leaders, and even the Sultan of Turkey. Although Herzl is undoubtedly the central figure in this colorful drama, the secondary characters are hardly less unusual: Albert and Edmond de Rothschild, Jewish philanthropists who were understandably hesitant about underwriting a new nation; The Reverend William Hechler, chaplain at the British Embassy in Vienna, who claimed to have discovered a justification for the restoration of the Jews to Palestine in a seventh-century prophecy of the Caliph Omar; Count Philip Michael de Nevlinski, a destitute Polish nobleman and free-lance diplomat who promised to smooth Herzl's way into the Turkish Sultan's court; an Anglo-Jewish professional soldier, Colonel Albert Edward Williamson Goldsmid, the atheist Max Nordau, the Grand Duke of Baden, and Arthur Schnitzler, among others. The man who could note with such conviction in his diary that he had founded the 'Jewish state' after organizing and leading the first Zionist congress in Basel, Switzerland, in 1897 (made up of a few like-minded visionaries who could not always agree even among themselves) and added that 'certainly in fifty [years] everyone will agree' would hardly have been surprised when, fifty years later, on May 14, 1948, the State of Israel was proclaimed. And in this colorful biography Amos Elon tells the incredible story of Theodor Herzl with all the drama and panache of Israel's 'founding father.'"--Jacket.… (more)