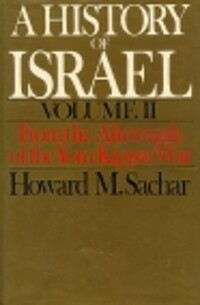 A History of Israel: From the Aftermath of the Yom Kippur War Volume II

A sequel to Howard Sachar's classic History of Israel: From the Rise of Zionism to Our Time, which Commentary called "monumental...a triumph of comprehensive scholarship which is also a delight to read," this book offers an equally compelling and powerful narrative and a wealth of human detail. The second volume begins where its predecessor left off, tracing the political, social, and economic growth of the Israeli republic from the traumatic aftermath of the Yom Kippur War in 1973 through the Begin and Peres eras. With lucidity and incisiveness, Sachar presents the fascinating saga of the ethnic "revolution" that brought Menachem Begin to power; the social upheavals that have shaken the Arab population of the West Bank; the growth of Palestinian terrorism and of incipient Jewish vigilantism; and the clandestine dialogue between Israel's and Lebanon's political leaders that culminated in Ariel Sharon's ill-starred 1982 military invasion. Since the Yom Kippur War, Israel's history has consisted of stark contrasts between dramatic military strikes abroad--Entebbe, Baghdad, Tunis among them--and confusion and violent confrontation at home over such issues as the settlement of the occupied Arab territories and religious extremism. Covering all the dramatic milestones since the mid-seventies, Sachar explores Israel's current malaise and the extent to which the fate of the Jewish nation rests on the foreign and economic strategies of the Great Powers. Both a compelling story and a penetrating analysis of Israel's current difficulties and achievements, this volume stands as a brilliant successor to a book critics and scholars have recognized as the definitive work in the field.… (more)

A History of Israel: From the Rise of Zionism to Our Time by Howard Morley Sachar
The Siege: The Saga of Israel and Zionism by Conor Cruise O'Brien
The Jewish Woman: New Perspectives by Elizabeth Koltun
The Jews in America: The Roots, History, and Destiny of American Jews by Max I. Dimont
Personal Witness: Israel Through My Eyes by Abba Solomon Eban
8 more
The Israelis: Founders and Sons by Amos Elon
The Seventh Million: The Israelis and the Holocaust by Tom Segev
In the land of Israel by Amos Oz
The Jew in the Medieval World: A Source Book, 315-1791 by Jacob Rader Marcus
Bar-Kokhba: The Rediscovery of the Legendary Hero of the Second Jewish Revolt Against Rome by Yigael Yadin
The Case for Israel by Alan M. Dershowitz
Great Jewish Thinkers of the Twentieth Century Edited with introductory essays by Simon Noveck
A Certain People: American Jews and Their Lives Today by Charles E. Silberman
Fewer